Irreverently reviewing the week
Home » What Are You Looking For? » Wry & Dry » No. 31 FY-20 » The sky is not falling. At the White House keyhole. Charting Bernie.
Load Previous Article

The sky is not falling. At the White House keyhole. Charting Bernie.

The story so far

It's a coronavirus-driven week.  And so Wry & Dry has little alternative but to follow.  Mostly.

1.  The markets: the sky is not falling

Readers might allow Wry & Dry to cut to the chase:

1.  Restrictions on the movement of workers and consumers will crimp short term economic demand and supply.  Global and Australian economic growth will slow in the March and June quarters.  Don't be spooked by the word 'recession'.  Millennials haven't heard of it, but it used to happen about every 6 or 7 years.

2.  The collapse in the oil price, whilst a slight benefit to industrial economies, has a dislocating affect on companies and the bond markets.  But in the longer-term will assist in recovery.  And mean lower prices at the servo.

3.  Unlike the GFC, banks and the payments and settlements systems are okay.  The problem is short-term economic growth.  And the effect it has on companies, big and small.

4.  Central banks have already tied their own hands by ultra low interest rates.  But Readers should expect even lower rates to boost confidence.

5.  Governments are now acting to provide fiscal stimulus: Australia, UK and Germany amongst the developed economies.  Yoo-Ess-Ay, France and Japan are silent to date.

6.  Stock markets have reacted sharply, swinging from being massively overvalued to a place where value is difficult to assess.  But, like the GFC (which was much worse) almost all companies will survive.  And their share prices will be higher than today.

7.  Performance analysis is meaningless in such markets.

10.  If Readers have nothing else to do, keep track at: Click here

2.  The virus: which countries are prepared?

Tom Hanks got sick in Australia, where coronavirus testing is a snap.  In the United States, little if anything about the testing has been efficient or convenient. In Australia, it is free and widely available.

Prime Minister tells it as it is.  “I must level with you, the British public. More families – many more families – are going to lose loved ones before their time.”

President Trump reassures America.  "No nation is more prepared or more resilient than the United States.”

Readers will be asking essential coronavirus questions, such as will crowds be allowed to attend the MCG for the start of the AFL season?

Wry & Dry suggests a broader look.  Readers might draw Venn diagrams in their minds of the countries that are most economically vulnerable.  Draw the following six intersecting circles: poor healthcare, high sovereign debt, a large economy, a tradition of greeting with a kiss or two, a dysfunctional government and an ageing population.  And assign the 197 sovereign countries to the one intersection where as many of the six factors meet.  Only one country in the world is in all six circles of Readers' Venn diagrams: Italy.

The Italian economy will lose probably 3% of GDP in 2020.  The tourism sector is dead.  The industrial north is in shutdown.  The banking system is unlikely to remain solvent or liquid without massive external assistance.  The government has closed all shops (including bars and restaurants) except food stores and pharmacies.  Italy has some $2 trillion of debt, around 133% of GDP  This is the fifth highest ratio in the world, behind Japan, Lebanon, Yemen and Cape Verde.  Japan's debt is readily offset by massive foreign reserves.  Italy has no such cushion.

The Italian economy, the eighth largest in the world, will soon enter its fourth recession in a little over a decade.  Governments in Rome have a proud history of failing Fiscal Competence 101 since Nero [1] watched Rome burn and fiddled instead.

Italy is too big to fail.  The question on Readers' lips is who is going to sign the cheque?

[1]  Nero Claudius Caesar Augustus Germanicus (37 – 68 AD) was the last Roman emperor of the Julio-Claudian dynasty.  The story that he fiddled whilst Rome burned is apocryphal.

...Wry & Dry's man had his microphone pressed to the keyhole of Virus-What-Virus-Trump's Situation Room, and recorded the following conversation:

Trump (perplexed): So, what am I going to announce?

Person A: Well, sir, your actions so far have been outstanding: decisive, proportionate and reasonable.  You will go down as one of the great presidents.

Trump (getting angry):  Good grief, man!  I know that.

Person B (soothingly): Well sir, this is one way to get funds for the Mexico Wall.  Just tell people that the virus came from Mexico.  Republicans will believe anything you say.  And the Democrats are so bound up in the Biden-Sanders fight, they won't notice.

Person A (soothingly): But sir, there is a problem.  You actually want to get illegal Mexicans to leave, as well as not to arrive.  A wall isn't going to help with that.

Person B:  There is another idea, sir.  And that is to ban flights from Europe.  The virus is spreading faster in Europe than anywhere else.

Trump: Really?  Why not?

Person B (ignoring the question):  Sir, the virus has taken over Italy, and with all of Europe being more or less one country there is merit banning flights from the entire continent.

Trump:  What a fine idea.  But we cannot ban flights from the UK.

Trump:  Brexit, you fool.  Haven't you heard of Brexit?  Britain is no longer part of Europe.

Person B (sighing):  Of course.  Yes, sir.  You are absolutely correct.  We'll exclude the UK from the ban.

Person A: Excellent, sir.  Banning incoming flights from Europe (except UK) is a stroke of genius.  Planes can fly full of passengers to Europe and come back empty.

Trump (pauses, looking thoughtful):  Well, that's idiotic.  Lets fill those outbound planes with illegal Mexican immigrants, instead.  Europe welcomes refugees from all over the world.  And they won't notice a few million Mexicans.   And we won't have to pay for the Wall after all.

Persons A & B (together): Thank you, sir, your ideas are amazing.  You will go down as one of the great presidents.

Readers will recall some months ago that Wry & Dry finally got a handle on Borisconi's ideology.  And that is essentially Gaullism [2], i.e. the pragmatic exercise of conservatism, nationalism and centralised government.

The UK budget brought down on Wednesday reflected all of that.  And OTD goes austerity and smaller government.  The UK Chancellor of Exchequer announced £30 billion of giveaways, of which £12 billion is coronavirus measures.

This is UK's largest fiscal loosening since the early 1990s.  And this was combined with a simultaneous 0.5% point cut in interest rates.  One commentator observed that "Britain’s institutions have delivered a combined monetary and fiscal stimulus of breathtaking panache, each reinforcing the other for maximum effect in a textbook display of timely coordination." 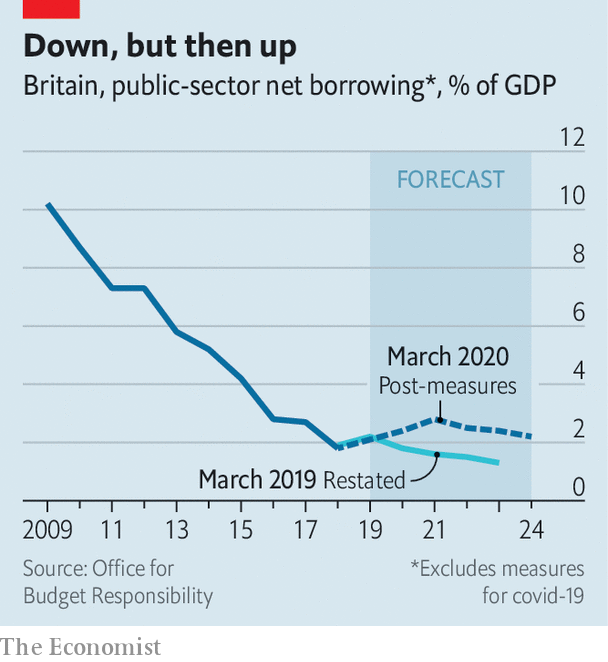 Wry & Dry wouldn't call it 'breathtaking panache', but rather a spirit of generosity driven by the upcoming Borisconi Baby.

[2]  Younger Readers may not be familiar with the gaunt and looming figure of President Charles de Gaulle, founding President of the Fifth French Republic.  De Gaulle's arrogance was legendary, causing Churchill to observe, "He thinks he's Joan of Arc, but I can't get my bloody bishops to burn him."

Readers will not be surprised to know that the Yoo-Ess-Ay has the highest healthcare costs in the world, at 16.9% of GDP.  The gap to the next highest is large: Switzerland at 12.2%.  Australia's is 9.3%.

However, despite the extra cost, the Yoo-Ess-Ay has among the lowest number of hospital beds per capita in the developed world.

Coronavirused Americans will be reassured to know that there is always Airbnb and UberEats.  But there are not too many doctors to do home visits: only 2.6 doctors per 1,000 inhabitants, #52 in world (Australia has 3.6).  If coronavirus thingy gets going in the land of the free and of the brave it could get uncomfortable.

Wry & Dry dips his lid to the mandarins in Beijing for excellence in propaganda.  It should come as no surprise, but now the lads are saying that the coronavirus didn't start in Wuhan.  In fact, not even in China.

Beijing's Foreign Ministry is saying that journalists are politicising the coronavirus by suggesting it originated in China "without any supporting facts".

And, of course, the 1989 Tiananmen Square massacre never occurred.

Reader should wait for Emperor Xi Jinping to emerge as a hero from the coronavirus.

8.  Unclear on the concept

Virus-What-Virus-Trump wanted passengers on a cruise ship offshore of San Francisco with potentially hundreds of infected passengers not to come ashore.

The reason?  Because it would drive up the official US count of reported cases and possibly deaths.  "I don't need to have the numbers double because of one ship that wasn't our fault," he said.

Readers will know that Tsars of Russia ruled for a lifetime.  That life may be cut short by an executioner (e.g. Nicholas II [3]), illness (Nicholas I) or just getting old (Catherine the Great).

In that tradition, it seems that Tsar Vlad is now going to be in power until at least 2036, when he will be nearly 84.  The ruling United Russia party have appealed to him to stay on as president once his current term ends in 2024.  They wish to reset the term limit under a revised constitution, allowing Tsar Vlad two more six-year terms.

Of course, Tsar Vlad is most reluctant.  "Aw shucks," he said, "But if the people want me, who am I to say no?"

Err, only 27% of Russians want him to stay on past 2024 (according to Levada Centre, an independent think-tank in Moscow).

[3]  Actually, Nicholas II abdicated in March 1917 at the height of the Russian revolution and was executed (along with his wife, son and four daughters) by the Bolsheviks in July 1918.

Bernie in a box

Wry & Dry is concerned that Readers might be confused about Bernie Sanders.  Allow Wry & Dry to give Readers a simple chart.  For the story behind the chart, Readers should click here.

Sanders is shown as a purple triangle ▲ in the ideology-leadership chart below.  Each dot is a member of the Senate positioned according to a liberal–conservative ideology score (left to right) and our leadership score (leaders are toward the top).

Readers would not be surprised that Sanders is the most left wing of all Senators.  But his leadership score is interesting, especially for a lad who wants to be the leader of the free world.

The problem is that narcissists don't know that they have no self-awareness.

This story was relegated to the inside pages and online links:

Walt Disney Co. is closing the Disneyland resort in California on Saturday through the end of month, a response to the spread of coronavirus in the most populous U.S. state.

Wry & Dry comments:  Donald Duck can now join the other Donald in putting up his feet.

Wry & Dry comments:  And the spring/ summer tourist season is just about to get under way.  Err, well, maybe not.

The Stoxx 600 Banks index, which covers major European banks, closed last night at where it was in March 2009.

Air Canada has cut its order for Boeing's grounded 737 Max by 18%, marking a major cancellation by a large Western airline in the wake of two fatal crashes and a much-prolonged return to service.

Wry & Dry comments: This won't be the last cancellation.  The economic affect of coronavirus on airlines is going to be massive.  Airlines are now looking a few years out and considering how to manage what will be significant cash flow problems.  Boeing is at the end of the line.  It's share price has fallen 50% in 27 days.

On March 7th the Lebanese prime minister, Hassan Diab, announced that his country would not repay a $1.2 billion Euro-bond due two days later.

“The virus will not have a chance against us. No nation is more prepared or more resilient than the United States.”

In the Pantheon of Big Statements, this is probably the biggest.

Investment Matters
Where to from here?