Whilst the eyes of Victorians were on signs of white smoke coming from the roof of the government offices [1], thus signalling good news of the end of the latest fatuous, expensive covid lockdown, broader eyes were on an upcoming lockdown in Cornwall, England.

Y'see, the G7 is meeting in Carbis Bay, a usually sleepy seaside, as it were, village. And Australia's PM Jimmy Morrison has a guernsey as a guest of Borisconi.

Wry & Dry's man person is already there, and presents his forecast of what each of the leaders is hoping to get.

Joe Biden, Yoo-Ess-Ay: hoping to find an elixir in nearby sacred waters that will make him impervious to rude comments about his age. The locals know that the elixir DFO is just behind the Zimmer Frame parking lot.

Mario Draghi, Italy: hoping for a G7 grant of 8 trillion euros to flush down the fiscal toilet that is Italy.

Borisconi, UK: hoping that his new wife, Carrie, will not run into any of his previous, err, wives. 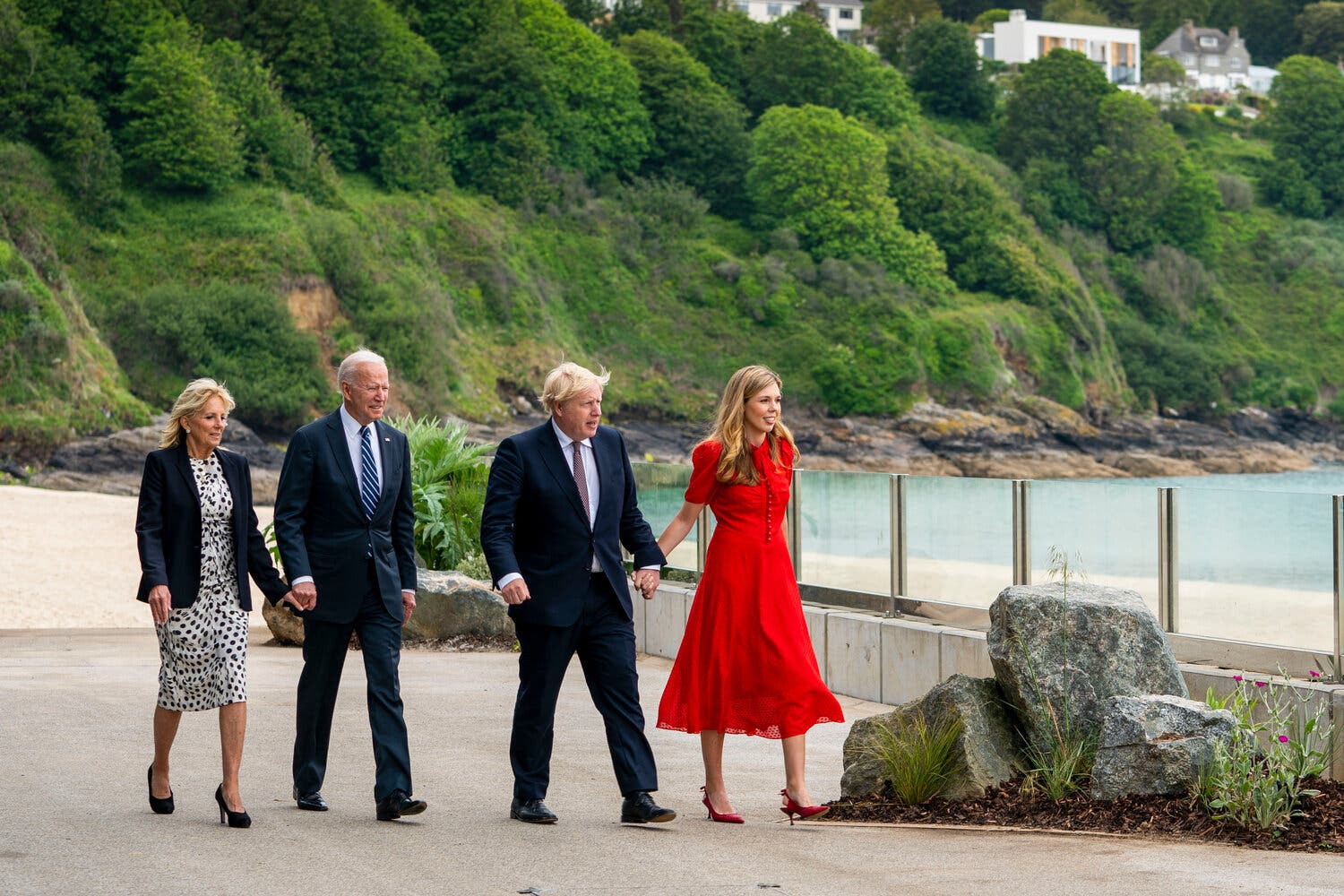 Emmanuel Macron, France: hoping that he doesn't get slapped in the face by a spectator, for the second time this week.

Angela Merkel, Germany: hoping that she hasn't been booked into Fawlty Towers in nearby Torquay, just in case someone forgets to not mention the war.  Readers may wish to click here.

Justin Trudeau, Canada: hoping to sell Canadian wind powered cargo ships, so as to save the planet.

[1] White smoke emanating from a chimney in the Sistine Chapel tells the world that a new Pope has been elected by the conclave of Cardinals.

How to become more liveable

But, Chairman Dan, do not despair, all is not lost for Victoria. It is now clear that all the Victorian CMO, the very earnest Professor Sutton, has to do is implore Victorians, when going to the football to "do not touch that ball."

It worked for Adelaide. It will work for Melbourne.

Speaking of rankings, but locally this time, astute Readers will know that this week PM Jimmy Morrison became Australia's 17th-longest serving PM. He auspiciously leapt The Ruddster's 2 years and 286 days.

And next month he'll zoom past Croesus Turnbull, Dear Julia and Well May We Say Whitlam.

[3] Sir Robert Menzies. He received the sobriquet when he was Attorney General, and negotiated a solution to the 'Dalfram Dispute'. In November 1938 wharf labourers refused to load pig iron onto the steamship SS Dalfram headed for Japan. The ship was to supply the Japan Steel Works Ltd in Kobe. The Japan Steel Works was producing military materials for the undeclared war in China.

So, to get to a BMI of 25, he needs to lose a few kilos. Which is apparently what has happened. Wry & Dry's under-deep-cover man person in Pyongyang reports that Kim, although not quite svelte, has shed many kilos. Perhaps down to 100 kg.

Of course, the nasty Western media have portrayed the loss of kilos as signs of deteriorating health. How absurd.

Wry & Dry has added it up. One trillion US dollars. This is the single number that shows how daft cryptocurrencies are.

Y'see, $1 trillion of assets (see left hand column) have been created from nothing. 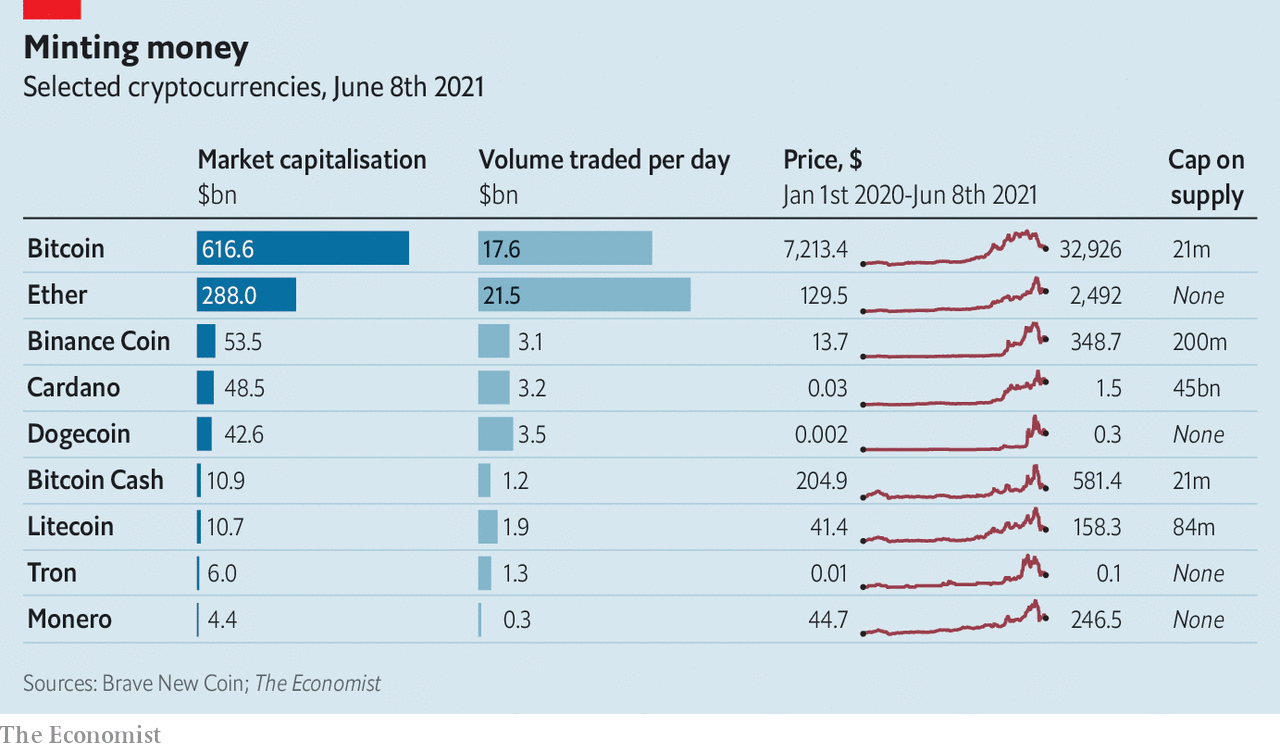 And there are over 10,000 cryptocurrencies listed on CoinMarketCap.

One trillion dollars of value exists solely in the minds of some investors. There are no cars, factories, iWatches, refineries, companies, buildings or shops. Just a holographic illusion of FOMO value.

El Salvador [6] has made Bitcoin legal tender, alongside the US dollar.

Hmm. Why allow a speculative asset to be used as legal tender? It's RDS: President Nayib Bukele's announcement was in keeping his increasingly autocratic tendency for flashy and unexpected announcements that seem to contradict common-sense. In May he fired five Supreme Court judges on a whim.

The daft thing is that any trader on Main Street in San Salvador in receipt of Bitcoin will sell it for USD, which makes Bitcoin nothing more than a profitable trading opportunity for cryptocurrency exchanges.

[6] An impoverished and tiny Central American country, about 20% of the size of Tasmania and with a population of about 6.4m.

This is a health warning.

Do not expect mention of the Great Leap Forward, the Cultural Revolution or the Tiananmen Square Massacre. Expect round-ups of the usual suspects, from Hong Kong to Xinjiang (home of the Uighurs).

Do not expect mention of the some 77 million killed under Mao Zedong.

[7] The CCP was founded in 1921, mainly by Chen Duxiu and Li Dazhao, with the help of the Far Eastern Bureau of the Communist Party of the Soviet Union. The CCP's true founding date was 23 July 1921. But don't let facts get in the way of a good party.

The birth of a second child to Princess Princess and Princess Harry is doubtless happy news for them. It will provide many media opportunities to keep out of the media spotlight. And will doubtless enhance their dosh at bank as exclusive stories are sold to eager American media outlets.

It's also good for the broader Royal Family. It pushes Prince Andrew further down the line of succession. It would take a series of events of statistical outlier magnitudes for Prince Andrew to get close to sitting on King Edward's Chair [8].

But never say never. Number nine is further away than number eight. Mind you, Prince Andrew has probably never aspired to place himself on what must be a most uncomfortable piece of furniture. He would prefer more agreeable and younger pieces.

[8]  King Edward's Chair is an ancient wooden chair on which British monarchs sit when they are invested with regalia and crowned at their coronations. It was commissioned in 1296 by King Edward I to contain the coronation stone of Scotland. The chair was named after Edward the Confessor, and was previously kept in his shrine at Westminster Abbey.

The Covid-19 pandemic is over in Norway, according to one of the doctors leading the response against coronavirus in the rich Scandinavian country.

Over? Really? Yes. People are relaxed. This week the average number of daily new cases in Norway was 168. But...there is no lockdown. Shops are open. International travellers from the UK and EU have to self-quarantine for 10 days, travellers from other countries still have to hotel quarantine.

Review of the week

The UK Telegraph reviewed the Princess Princess' debut book, a children's book, as "the Duchess of Sussex's semi-literate vanity project."

Really, no insights there. That's a somewhat shallow review, Wry & Dry considers. Readers will know that everything the Princess Princess does is a vanity project, so would her book be anything different? Err, no.

As for semi-literate, well, she is from California.

US consumer prices increased by 5%, the most in nearly 13 years, in May compared to a year ago, as inflationary pressures continued to flare up in the world’s largest economy.

Wry & Dry comments: The data was watched even more closely than the latest vacuous comment from Princess Princess and Princess Harry.

US officials said they have recovered $2.3m worth of the ransom payment made in Bitcoin to hackers who shut down the Colonial Pipeline last month and disrupted the country’s fuel supplies for several days.

G7 nations reached an agreement on a global minimum tax.  In its current form, companies would pay at least a 15% tax on income, regardless of where they are based, making it less advantageous to relocate operations to countries with lower tax rates.

Wry & Dry comments: This will fall at the first hurdle: the US Senate.  Good luck with your projects, G7

Global credit ratings agency S&P has taken Australia off a 'negative' AAA and returned it to 'stable' AAA.

Wry & Dry comments: “The government’s swift and decisive fiscal and health response to contain the pandemic and limit long-term economic scarring has seen the economy recover quicker and stronger than we previously expected,” S&P says.

“We've taken the first step to an acceptable international investment climate - three days into the forum and nobody's been arrested.”

More than three quarters of Russian businessmen said they feel unsafe from unfounded criminal prosecution by the state, according to a presidential security service survey last month; moreover, 18 per cent of prosecutors agreed with them. Source: UK Financial Times.