Irreverently reviewing the week
Home » What Are You Looking For? » Wry & Dry » No. 30 FY-17 » Zimbabwe - a basket case gets worse
Load Previous Article

Zimbabwe - a basket case gets worse

W&D likes to keep readers apprised of those countries that are close to economic death.  The W&D articles in recent weeks on Italy and Greece are not to suggest that either is close to death, W&D hastens to add.  In each case, fine food, fine wine and the bonhomie of the locals will keep them afloat.

But Venezuela and Zimbabwe have neither fine food or fine wine.  And any bonhomie their citizens may have had has been crushed by the idiocy and oppression of their tinpot, despotic leaders.

This week W&D's microscope, with the help of some data from the Economist, updates readers on the plight of the people of Zimbabwe.

It was only three years ago that W&D took four of his well spoiled offspring to Victoria Falls, on the border of Zambia and Zimbabwe.  This magnificent natural wonder is the only tourist site in Zimbabwe.  And one of its few sources of foreign currency.

But the customs post at the airport reminded W&D of the fictional African country Zangaro in Frederick Forsyth's The Dogs of War. And it got worse.  The only respite was the gloriously colonial Victoria Falls Hotel, a relic from a more stately, dignified and wealthy era.  Elsewhere, everything seen was decrepit, impoverished and hopeless.

And this in what was once Africa's richest country.  What went wrong?  Well, in one word: President Mugabe.

W&D has previously written of the fractured process that brought Mugabe to power and the shameful role played by the woefully naive former Australian PM Fraser in getting him to power.

Zimbabwe once enjoyed an abundance of natural resources, a booming agricultural sector and a wealth of human capital, but over the past 37 years Mr Mugabe has managed to squander nearly all of it. Almost a quarter of Zimbabweans are currently in need of food assistance and 72% live in poverty. Within a generation, Mr Mugabe has turned an entire country upside down. How did he manage to wreck Zimbabwe? 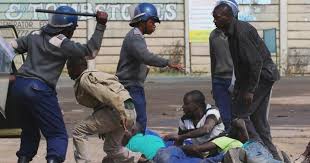 Mr Mugabe was a Marxist guerrilla who came to power in 1980 after the country won its independence from Britain. Mr Mugabe made a promising start—calling for reconciliation with white Zimbabweans, and improving access to education and health care for all. But his early policies were overshadowed by what followed. To support the cost of various schemes, Mr Mugabe overspent wildly - a practice he has continued throughout his administration. And as he clung to power over the decades his rule became autocratic, undemocratic and oppressive. This has all caused typical forms of suffering. But the way in which Mr Mugabe has brought Zimbabwe to its knees is through gross economic mismanagement.

A turning point in Mr Mugabe’s series of presidential blunders was the year 2000, when he launched “fast-track” land reform and encouraged a violent takeover of white-owned farms, then the backbone of the country’s farming sector. Most of the seized land was given to black farmers who lacked experience with modern agricultural practice; many were chosen on the basis of their connections to Mr Mugabe and his party, the Zimbabwe African National Union Patriotic Front (Zanu-PF). Till then the envy of the region and the primary source of export revenue for the country, Zimbabwe’s farms suddenly faltered—and sent shock waves rippling through the economy.

The fiscal situation had been stretched already, with Mr Mugabe having embroiled Zimbabwe in Congo’s civil war. His central bank began printing money faster, to pay off debts and compensate war veterans, seen as an important pillar of Mr Mugabe’s support, and to offset higher prices caused by the farms’ failure. The spiral quickly spun out of control. At one point in 2008 inflation hit the rate of 231,000,000%. The currency had to be denominated in notes as large as the $100 trillion Zimbabwe-dollar bill - worth about around 40 cents at the time of its demise.

The testament to Mugabe's economic prowess

Hyperinflation concluded when the Zimbabwe dollar was scrapped altogether in favour of a multi-currency system in which the American dollar was predominant. For a brief period, Mr Mugabe’s destructive economic impulses were tempered by a power-sharing arrangement with the opposition.

But since resuming complete control in 2013, he’s returned to his former habits.

This past weekend Mr Mugabe hosted a lavish 93rd birthday party for himself. He said he wants to stand for another five-year term as president in 2018. He has also said that “only God knows” if anything can stop him.  While God has not intervened, behind the scenes the struggle to succeed him has begun in earnest.

Mr Mugabe’s second wife Grace—his former secretary and mistress—and his vice-president, Emmerson Mnangagwa, are seen as leading contenders. Absent a designated successor, Mr Mugabe’s departure will create a vacuum which could actually add to his country’s woes. Under Mr Mugabe, economic chaos has been a constant feature of life in Zimbabwe.

But it will take more than the death of a tyrant to undo his legacy.