Irreverently reviewing the week
Home » What Are You Looking For? » Wry & Dry » No. 34 FY-21 » Why can't a woman... Suez blockage. Californian hippydom.
Load Previous Article

Wry & Dry knew that it was a Self-DCM for then PM John Howard. Howard revealed that he sought the advice of his wife on whether or not to cede leadership to Peter Costello in 2007 and to contest his final election. There's nothing wrong with consulting a partner. But why put it on the front page of The Age?

Not only did Howard lose the election, he also lost his seat. (Perhaps, maybe, just sayin'... Janette's political nous was blinded by her antipathy towards Costello.)

Which brings Wry & Dry to PM Jimmy Morrison. Jimmy this week, again, revealed conversations with his wife. And their role in his decision process. This is a sure sign of impending demise. Send for Speedy Home Removals.

Premonitory? Perhaps. But witness the entrails. With the speed of Geoffrey Boycott at bat and surety of a child choosing which chocolate to take, Jimmy has taken five weeks to decide that women do, after all, deserve a measure of respect greater than the opening of car doors.

So, Readers can see that there are two issues here. Firstly, Jimmy's inability to appropriately respond in a timely manner to a non-economic issue as a Prime Minister should. Secondly, it took a shocking workplace incident to lift the dense and damp Morrison fog to understand the absolute priority of workplace safety (to put the issue in its bluntest, blandest terms), especially for women, over political expediency.

The upcoming cabinet reshuffle and parliament now not sitting until the budget is brought down in May has given Jimmy breathing space. And possibly, maybe some measure of forgiveness as the hostile court of public opinion eases.

But Wry & Dry is not sure that Jimmy gets it. Australia wants a kinder, gentler place [1] alongside economic security, not behind it.

Professor Henry Higgins, one of literatures great misogynists, [2] did ask "Why can't a woman be more like a man?"[3]  The answer is, of course, they need not be, to get the respect they deserve.

[2]  Created by George Bernard Shaw in Pygmalion, which was turned in arguably the greatest musical of all time: My Fair Lady.

[3]  In a Hymn to Him, famously sung by Rex Harrison in My Fair Lady, by Lerner and Lowe.  Harrison himself was a misogynist and notorious womaniser.  Two of his wives/ mistresses committed suicide.  He was married six times. 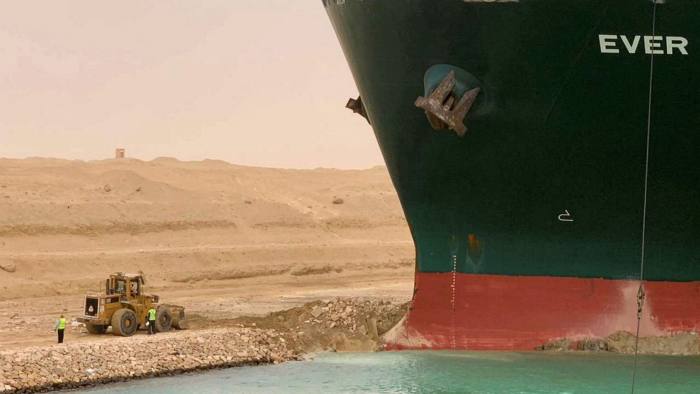 Somehow, the driver of this, err, massive ship [4], parked it in the side of the Suez Canal. And how about the excavator sent to try and dig it out? Imagine the parking fine from the Egyptian government.

Readers fed up with watching Netflix or reruns of Neighbours on FTA television can watch a real time update on the ship's movement by clicking here. This morning, the map showed not only the position of the Ever Given, but also the tail-back of ships waiting to get by:

Wry & Dry hopes that the driver uses the reversing camera a little more carefully than he used his dash cam.

An elite unit of Italian military policy, acting on EU orders, raided an AstraZeneca factory near Rome last weekend. The raid was seeking to confirm the EU's long-held suspicion that AstraZeneca was giving the UK special treatment, secretly exporting doses of its vaccine to its home country while failing to deliver on contracts agreed with Brussels.

If you cannot have a kingdom, try a hippydom. Well that's what Princess Harry is going to do.

Clearly the inheritance he has from his late mother and the $50m Netflix deal is just not enough. Having been fiscally excommunicated from his father, the lad has found work. He will now be bringing home an honest wage. After all, he has mouths to feed and bills to pay. And a wife to keep happy.

Princess Harry will be working for BetterUp Inc, a Californian firm that specialises in a kind of corporate life-coaching. Wry & Dry has saved Readers the research effort. Here’s how it describes itself: its aims are to “help people become the best version of themselves”, “pioneer growth for the whole person”, and to “reframe how we think about human flourishing”. Its stated values, meanwhile, include “zest”, and “craftspersonship”.

Craftspersonship is, quite obviously, a form of gender-neutral knitting.

Wry & Dry dips his lid to Princess Harry. The history of the Royal Family suggests that he is breaking new ground. Queen Victoria did not preach that her subjects should be the best versions of themselves. George III may have lost America, but he certainly wouldn't have to consider to pioneer growth for the whole person.

Henry VIII did not break with Rome so that he could reframe how people think about human flourishing. Well, Wry & Dry supposes he sort of did, in a way. Provided it was himself flourishing and it allowed him to marry Anne Boleyn. But he probably wouldn’t have put it in so many words.

Readers will remember the Commission of Inquiry into Victoria's killer Covid quarantine system. Its key finding was that no-one was responsible for the 802 deaths.  One of the contributors to the outcome was the "I don't recall" defence used by politicians and senior public servants.

A Reader sent Wry & Dry a Masterclass in I Don't Recall 101. Click here to enjoy the video.

The person in the chair in the video was Nicola Sturgeon, First Minister and Wannabe first Prime Minister of Scotland, answering questions put at a parliamentary inquiry into her dealings with matters involving her predecessor.

According to an academic report released yesterday, it will take 26 years for the gender pay gap to close to zero.

Hold the phone. If that happens, then equal pay for equal work has been overturned: women will earn more than men. Why? Wry & Dry hears Readers ask.

The answer is that any analysis of the gender pay gap must be adjusted for at least two significant factors: (a) most women take up to five years to resume their careers (thus missing out on pay and promotion in that period) for childbearing and rearing; and (b) more women than men choose to work on roles that they deem more satisfying or suited than men, but are not as remunerative (e.g. nursing).

Therefore, it follows that if the unadjusted gender pay gap is zero, women, on average, will earn more than men. Q.E.D.

As Readers would expect, the academic report has prompted a Friday-whirlwind of uninformed and ignorance-based comments. And just wait for the weekend newspapers.

Wry & Dry hastens to add that there is little doubt that there remains a significant adjusted gender pay gap in Australia. And employers need do more to ensure it closes to zero. But leave the hysteria at the door.

Victorian Readers will be aware that Victoria's quarantine programme is soon (on 8 April) to re-open. This is the third attempt.

Wry & Dry wants the Victorian government to name in advance the person responsible for the programme, so that if it all goes pear-shaped again, we-the-resident know who should get the DCM.

Readers may have occasionally reviewed the world's interest rate tables. And been curious at the cash rate in Turkey, which was 17% until last week. Well, after all, year-on-year inflation in February reached 15.6%. High interest rates are a supposed to strangle inflation.

But Sultan Recep Tayyip is not a big fan of high interest rates.  And so, when Naci Agbal, the Turkish Central Bank chief, hiked rates by 2% last week, Sultan Erdoğan went nutzo. And gave him the DCM last Saturday morning. The Turkish lira fell by 14% on Monday's opening.

Agbal had been in Chief Teller's chair for just 4 months. And is the third central bank chief to whom the Sultan has given the DCM in two years.

Being central bank head in Turkey must now qualify as one of the most perilous jobs in international economics. It is now clear that investors indulged in consensual hallucination on Agbal's appointment, i.e., this time it would be different and that the Sultan would not interfere. Err, no.

This is how a banana republic might behave, not a member of the Group of 20 major economies and the OECD.

What's going on? China was one of the few countries to have positive growth last year and Emperor Xi has been happily talking up everything about his country.

But investors don't seem to agree. Well, so far this year. China's major share-market indices are about 10% behind other major indices: S&P 500 (US) and FTSE 100 (UK). New York Stock Exchange volumes have been 80% of the 30-day average, while Nasdaq activity has been 90% of its average, remarkably low given the declines in certain sectors.

The world's most profitable company, Saudi Aramco maintained its 2020 dividend at US$75 billion, in spite of making just $49 billion profit (which also was its free cash flow).

Wry & Dry comments: Well, it would pay out that much, wouldn't it.  Its major shareholder is the Saudi government, which desperately needs the dosh.

The headline UK's unemployment rate unexpectedly slipped to 5%; inflation fell to 0.4% in February and average weekly earnings rose by 4.8% in the year to the end of January.

Russia's population fell by almost 600,000 (to 146 million) over the past year, and life expectancy in the country fell for the first time since 2003.

Wry & Dry comments: Not even payment of $10,000 to mothers of three or more children has worked.

5.  UK down to one coal-fired power station

Britain will have only one power station still burning coal by the end of next year under plans by EDF to close its Nottinghamshire power station by September 2022 at the latest after more than half a century of operations.

- Peter Berdowski, CEO of the Dutch company Boskalis, one of the maritime service providers working to free the ship blocking the Suez Canal.

In a Captain Obvious comment, he added that the rescue mission was far from straightforward.

PPS  Wry & Dry will not be published on Friday 2 April and Friday 9 April.  Easter/ Passover vacation.

Investment Matters
One wedged ship and a few timely reminders