Readers may know that the practice of quarantine is first referred to in the seventh century BC [1] and became a common practice most notably in the 14th century in Venice and also in what is now Dubrovnik.  To stop plague epidemics, all passengers and crew arriving on ships were required to be isolated for 40 days [2].  The measure proved to be most effective in preventing the spread of the plague.

The success of the quarantine depended upon effective adherence to the rules prescribed for the isolation.  Which brings Wry & Dry to an image appropriate for the disaster that has befallen the good folk of Melbourne [3].

[3]  For seven successive years named the "Most Liveable City" in the world.  A title it is doomed never to recapture.

Readers may be familiar with The Sorcerer's Apprentice, as portrayed by Mickey Mouse in the delightful movie Fantasia.  Essentially, the Apprentice thought he had managed a situation (casting a spell on a straw broom to make it do his work of carrying water from a well to the kitchen), and drops off to sleep in his chair.  Unbeknownst to him, as he sleeps in self-satisfaction, the situation spirals out of control (the straw broom had kept going, robotically, and the kitchen is now flooded).  What he thought worked turned into a disaster.

He makes matters worse, by taking an axe to the straw broom, but each of the hundreds of splinters turns into a full straw broom and each continues to pour water into the kitchen.  The Apprentice's world is being overwhelmed by the out of control straw brooms.  The Sorcerer's castle is now filling with water.  There is merit in viewing the short film clip Click here.  Paul Dukas' music is amazingly evocative. [4]

Readers may wish to consider an analogy between coronavirus and the marching broomsticks.

The Apprentice, in the end, is saved by the Sorcerer.  But loses his job.

Wry & Dry notes that this morning's Age newspaper reported that Premier Daniel Andrews said that he did not know which of his ministries or departments was responsible for the quarantine hotels' fiasco.

[4]  Of course, as with the rest of Fantasia, the music came first. The animated stories were crafted around the music of Beethoven, Dukas, Tchaikovsky, Bach and others.  Dukas' music was based on a short poem written by Goethe.

Wry and Dry has been issued with a 'Permitted Worker Permit' (PWP) to allow him access to his Collins Street Salt Mine.

This is more than faintly ridiculous.  For three reasons.

The title - "Permitted Worker Permit" - is classically public-service tautological.  Why not just 'worker permit'.  Can there be an unpermitted worker permit?

The idea is disturbingly reminiscent of the permits used in the Soviet Union prior to the collapse of the Berlin Wall.  Or currently used today in... China, perhaps where Wuhan Dan got the idea.

The PWP unwittingly confirms for historians in a most risible document that the state government has lost complete control over its handling of the pandemic.  Holders of the PWP will leave the archaeologically significant document in their wills, as an asset to be valued, cherished by descendants.  The only pity is that they have not been numbered, which would add significant value to a PWP at auction houses in the future.  Imagine owning a single digit PWP.  But not quite a First Folio.

* Readers may be familiar with John Gunthers' Inside Russia Today, written in 1958.  Only a little more objective than Edgar Snow's Red Star Over China.

The below chart has been provided to Wry & Dry by well known independent economist Saul Eslake.  Wry & Dry makes no comment, as the facts speak for themselves.

The price of gold, that bellwether of panic, exceeded $2,000 per troy ounce [1] for the first time on Tuesday.  The media says that it's all about the Sino-American fight in the sand-pit.

Wry & Dry considers that it's more to do with a weak US dollar (now at a 2-year low), reflecting expectations of a weak US economy.  This depresses interest rates, depressing investor demand for US assets.  Inflation expectations are rising.  This means that real yields are falling, which usually means that the price of gold rises.  For the gold price to keep going up, real yields need to keep falling.  Got that?

This is what happened in 2011.  Well, real yields fell then.  But the price of gold didn't rise after a rally - see the chart.  It almost halved in value.  Why?  Because the expected rise in inflation just didn't happen.  Will it be different this time?  It's... too early to tell. 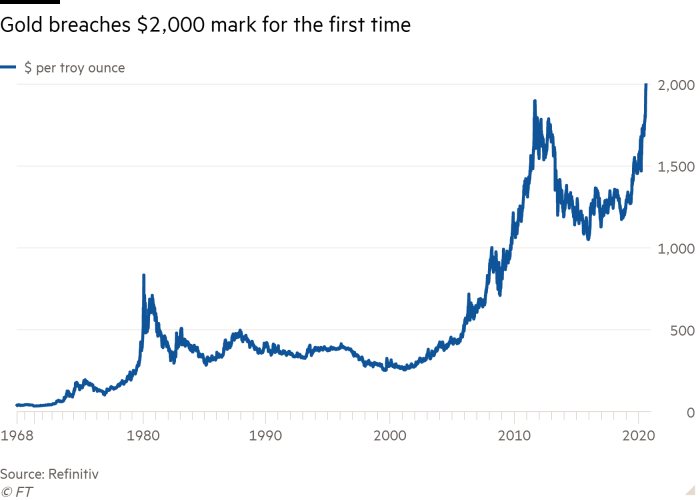 By the way, forget the media yells about the "record price for gold".  On inflation adjusted basis, the price of gold was $2,800 in January 1980, just after the Soviet tanks rolled into Afghanistan.

Wry & Dry's man person in the north of England reports that housing prices are rising because of buyers from Hong Kong.

The rush from Hong Kongers to buy homes in the UK is understandable given the 'push' from Hong Kong and the 'pull' from the UK's offer of a path to a UK citizenship.

But, well, really, Manchester? The home of only one of two test matches abandoned because of rain.

PS: Some 260 Chinese fishing boats are encroaching on waters around the World Heritage Site of Galapagos Islands.

Psephologists may wish to see this video Click here

Unclear on the concept 1

Virus-What-Virus-Trump wants to ban Chinese social media app TikTok from the US.  TikTok's parent wants to sell its US business.  Microsoft wants to buy it.  What could be simpler.

In a shameless bid for a fee that would make Goldman Sachs blush (well, for a short time), V-W-V-Trump wants the US Treasury to get a cut of the deal, "...because," he said, "we're making it possible for this deal to happen."

Unclear on the concept 2

A man from Sheffield UK, set out 100 tea lights in his apartment reading ‘Marry me?’ as part of his plan to propose to his girlfriend.  But when he went out to pick up his girlfriend to bring her home for the surprise, the apartment caught fire.  And was gutted.  Undaunted, he later went down 'pon bended knee among the ashes.

Virus-What-Virus-Trump threatened ban of social media app TikTok has caused a huge outcry in China, the home of the company.

Disney now has over 100 million paid subscribers across its streaming services, which include Disney+, Hulu and ESPN+.

a. Sir Richard Branson plans to fly on a Virgin Galactic spaceship next year after the company settled on an early 2021 date for its first passenger flight.

b. Virgin Atlantic is seeking Chapter 15 bankruptcy protection in the Southern District of New York as it tries to nail down a £1.2 billion rescue plan.

Wry & Dry comments:  There is a pun in there somewhere...

Venezuela has filed a $1 billion lawsuit against the Bank of England over its refusal to release gold stashed in its vaults, as the government of Nicolás Maduro scrambles for funds to alleviate a deepening economic and health crisis.

Wry & Dry comments:  The lawyers for Venezuela should ensure that they get paid in advance.

The New York attorney-general yesterday sued to dissolve the National Rifle Association, accusing its powerful leader, Wayne LaPierre, and a coterie of top executives of siphoning off millions of dollars from America’s formidable pro-gun lobbying group for their own benefit..

Wry & Dry comments:  NRA was founded in New York in 1871 as a charitable organisation.

Google’s parent company Alphabet locked in some of the lowest borrowing costs ever for a US company on Monday. Alphabet's five-year bond was priced at 0.45%, just 0.25% points about the US government's costs of funds.

Wry & Dry comments:  The average yield across US investment-grade corporate bonds sank below 2 per cent for the first time in July and was 1.91 per cent at the end of last week.

Biden, a Catholic, has been quite open about his faith.

...sighed deeply as Wry & Dry hopped into the jalopy.

“Quarantine is sadly over, and the rooster has arrived,” said Deepak.

“And, what’s he like, the rooster?” asked Wry & Dry brimming with curiosity.

“Now that is short, even for a rooster with a feather in his cap,” chuckled Wry & Dry.

“He looks ridiculous driving Anjali’s Panzer, he has to use Amulya’s booster seat to see over the dash. Not sure how he reaches the pedals!” Deepak exclaimed.

“No choice, Daddy paid, remember. However, what Daddy lacks in size he makes up for in charm. You should hear him go on! Even Amulya is smitten with him. Grandpa this, Grandpa that, she even let him play with Sanders, Sir Donald Trunk and Nancy.  And no one ever gets to play with Nancy.”

“No, no one would dare,” said Wry and Dry wryly.

“And, you should hear the lines, "Don’t you look wonderful in rubies". "Pearls are just right around your neck". He goes on and on,” Deepak grumbled.

“Ah, the not so subtle reference to a woman and precious stones, dangerous territory. Always best to flatter cheaply, you have beautiful eyes, your skin is like china, not Limonges of course, etc etc,” reflected Wry & Dry.

“Absolutely that’s why I always tell Anjali her vindaloo is the best there is. Can’t lead into any trouble,” said Deepak with an air of certain confidence.

‘Well, there is that, but hardly romantic either. I am reminded of the famous scene in Pride and Prejudice when the rather unfortunate Mr Collins claims that he spends his spare time devising little comments as to flatter the ladies, of course in the most unstudied of air!” said Wry & Dry.

“There are some uncanny similarities between Mr Collins and my future father-in-law. It’s just that only I can see them,” wailed Deepak.

“Time for what exactly, Mr. Wry & Dry?” asked Deepak as he pulled curb-side.

“You know what they say about roosters, Deepak. A rooster one day, feather duster the next!” retorted Wry & Dry as he strutted off down the street cackling with laughter.