Irreverently reviewing the week
Home » What Are You Looking For? » Wry & Dry » No. 27 FY-18 » Correction? You call that a correction. Google trends. E.L.E?
Load Previous Article

Correction? You call that a correction. Google trends. E.L.E?

Deep Impact was a C-grade movie that Wry & Dry remembers for the name 'Ellie'.  In fact, Ellie was not the mistress of a politician but E.L.E: Extinction-Level Event.  The E.L.E. was the upcoming crashing into Earth of a comet, causing the extinction of life.

Which brings W&D to the media headlines of this week.  Readers will remember that the ASX fell 3.2% on Tuesday, following a 4.6% fall in the Dow.

Podium finish for headline of the week goes to the wannabee serious broadsheet, The Australian, for "OUR DAY OF RECKONING" on Wednesday, in font the size of which is normally reserved for the death of a princess.  And well above that for a declaration of war or a sensible statement by The Leader of the Greens.

On reading the headline, W&D pondered that a comet of some girth was going to land on his front-lawn.  The only happiness of which would be confirmation of an E.L.E. for the dreaded possums habituating the Australian native tree on his nature strip and despoiling the ornamental garden, which was carefully nurtured by Mrs W&D and paid for from W&D's wine-money.

But no.  There was a stock-market 'correction', after months of steady increases, especially of the US market.  The credit for those increases had been taken by Tsar Trump, who, in a fit of bewilderment at the market downturn, allowed his Twitter account to remain untouched for 24 hours; a hitherto unknown event.

W&D has said time and again that an over-valued market will correct, for whatever reason.

And so it was.  The entire planet knew that the US stock-market was significantly over-valued (but not the Australian market).  Except possibly Tsar Trump.  But the market kept on rising on the well-researched FOMO theory.  Fear Of Missing Out meant that investors have kept on piling into the market in spite of its increasing over-valuation.

W&D offers the below US and Australian market perspective.  (Note: these are market indices and not First Samuel clients' share performances.)

And if reading time doesn't permit, remember that patience is an investor's best friend.

Market corrected by, err, the weather

W&D noted above that an over-valued market will always correct, for whatever reason.  Well, Readers may wish to consider the following.

So, what caused the 'strongest wage growth since 2009'?

Well, in the same vein that the Greens blame every possible adverse human outcome on global warming climate change, so W&D is going to blame the US wage data on, err, the weather.  And rightly so.

Work with W&D on this.

The worse than usual bitterly cold and snowy conditions in the eastern US early in January and more nasty weather later in the month forced thousands of lower-paid workers to have their shifts cancelled.  But higher paid workers, who may have also worked fewer hours, still received the same pay.  So average wages grew because fewer hours were worked.

So the weather explains both the surge in average household earning and the drop in average weekly hours worked.  The January weather anomaly should correct in February.

But the reason doesn't really matter.  An over valued market will correct.  And it did.

And is still so doing.

Speaking of correction, the CBA, an Australian bank, had to 'correct' its half-yearly profit outcome, downwards, by $575,000,000.  Now that's a big number.

On Wednesday, the outgoing CEO, Mr Narev announced a profit fall of 2%.  The profit fall was because of 'provisions' of $200m for compliance, Royal Commission costs, etc and $375m for a possible penalty for allegedly breaching anti-money-laundering/ terrorism financing regulations.

The sum of $375m was chosen by the bank's lawyers.  Possibly hoping to indicate to the court was it thought the Austrac fine should be.

But wait, there's more.  There is another US Treasury agency: Office of Foreign Assets Control.  OFAC 'administers and enforces economic and trade sanctions based on US foreign policy and national security goals... Many of the sanctions are based on United Nations and other international mandates.'

Readers will be aware that in 2014, OFAC reached a record $963 million settlement with the French bank BNP Paribas, which was a portion of an $8.9 billion penalty imposed for violating sanctions against Sudan, Cuba and Iran.  The principle of strict liability applies, i.e a bank doesn't need to know it was breaching UN sanctions, just failing to monitor transactions is enough.

W&D wonders if CBA's negligence may also come under the eye of OFAC.

Mr Narev may have been smiling at CBA's profit results' presentation (outside of the 'correction' the results were okay).  But compliance failings under his watch will cost the bank at least over half a billion dollars and probably much more.

Not much about which to smile, Mr Narev.

Readers will be aware of the youthful Prime Minister of Canada, a Mr Justin Trudeau.  Mr Trudeau is the son of former PM Pierre Trudeau and Margaret, his somewhat, err, erratic wife.  The younger Trudeau seems to have inherited an agglomeration of interesting genes from each of his parents, especially the charisma of his father and the wackiness of his mother.

And so it came as no surprise when Trudeau corrected a woman in Alberta, Canada, at a university forum.  In a question to the PM, she referred to 'mankind'.  The Prime Minister corrected her, saying. "We like to say peoplekind."

Aside from Trudeau's ignorance of etymology, W&D is curious as to who are the 'we'?  Is this the 'royal we'?

Readers will know that the royal we is what is known as the majestic plural (pluralis maiestatis), and is the use of a plural pronoun (or corresponding plural-inflected verb forms) to refer to a single person holding a high office, such as a sovereign monarch or religious leader like the Pope.

Does Mr Trudeau now see himself in the mould of that other great user of the royal we and avid feminist, Her Late Majesty, Queen Victoria?  Or perhaps His Holiness, the Pope.

And in his mirror see His Majestic Holiness, Mr Trudeau.

W&D is an analogue man in a digital world.  And so information from a company named after the sound a baby makes, Google, but which apparently is a technology company, had to be interpreted by his children.  W&D noticed the below chart from Google Trends:

This chart is a global thing - tracking searches on Google from around the globe for collections of words.  The words 'How to buy stocks' leapt in January.  On 31st January, the line peaks at 100 - the highest possible.

Readers can join the dots.

Don't mention the war I

... but Readers can mention the massive increase in pay and conditions negotiated by Germany's largest union, IG Metall, and the South-West employers' federation.  The deal is expected to be rolled out across Germany.

The metal workers will get a 4.3% pay increase (plus other payments) and the right to a 28-hour week (with pro-rata pay reduction - a point overlooked in the sensationalised headlines).

The critical point is the right to work a reduced week, something demanded by younger workers.

Time is no longer money.  Time is more important than money.  In Germany, at least.

German Chancellor Angela Merkel has capitulated and agreed to form a coalition between her centre-right Christian Democratic Union (CDU) party and the centre-left Social Democrats (SPD).  The parties have been negotiating since, well, the election that was held in September.  The price of her hanging on to government was the ceding of key ministries to the junior coalition partner.  SPD gained the precious ministries of finance, foreign affairs, justice, environment and labour.

W&D sees this as a deal with the devil. The German economy has been hitherto superbly managed by the powerful and austere Finance Minister Wolfgang Schäuble.  Herr Schäuble is probably best known to Readers for his rigid focus on fiscal discipline.  And as strongly supporting a no-bailout-for-Greece-if-it-doesn't-spend-less policy.

Herr Schäuble has been given the DCM.  The new finance minister will see a Europe more on the lines of that suggested by French President M. Macron, i.e. essentially a fiscally integrated Franco-German-led federation.

... the charming but energetic French President, M. Macron has decided to take on seven trade unions.

All M. Macron wants to do is to reduce France's massive and inefficient public sector.  Simple matters such as an end to jobs-for-life, introduction of performance-related pay and temporary contracts are on top of the headline-grabbing 120,000 proposed job cuts.

French workers may be work-shy.  But they are not strike-shy.  Rolling strikes will commence.

Les Miserable Striker, at the barricade

W&D congratulates the Leader of the National Party, Mr Barnaby Joyce, on the upcoming birth of his fifth child.  Readers will know that for a population to grow naturally, the fertility rate (number of live births a female has) must number greater than 2.3.  The 0.3 is to allow for deaths of children before reaching reproductive age themselves.

Mr Joyce has wisely spread his five children between two women, meaning an average of 2.5 each, comfortably above the required rate.

But W&D reads that sprog number five (by mother #2) was probably conceived whilst Mr Joyce was married to and living with mother #1.

Far be it for W&D to trespass into areas of personal privacy.  But knowing the personality of Mr Joyce, that he is a farmer and breeder of sheep, and a New Zealander, W&D wonders if he became confused as to... oh, never mind.

"Much of what passes for competition is more accurately described as persistent marketing and brand activity designed to promote a blizzard of barely differentiated products and 'white labels'."

-   Peter Harris, Productivity Commission chairman, in a review of competition in the banking sector.

Three young British tourists found a place to park their camper-van for the night.  On a sandy shore of a lazy stream.  After more than a few beers, they retired for the night.

They awoke to find water flooding into their camper-van. 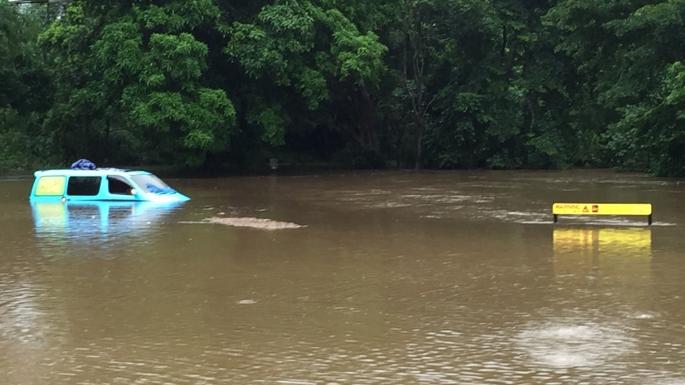 The river was crocodile infested.

They were rescued.  As for the camper-van...

Guess what happened next

Retiree Andrew McNaught bought a time-share in a resort in the Canary Islands in 1995, but now wants to sell it because he and his wife cannot go there because of ill health.  He then saw an advertisement for a company that offered to buy his time-share.

a.  Success, he sold his time-share, and for more than he paid;

b.  Success, he sold his time-share, but for a poor price;

c.  Failure, the agents promised much but failed; or

d.  Failure, he bought another time-share.

Close.  But no cigar.  The correct answer is d. McNaught was persuaded to buy a second time-share in the same resort, for much more than the price of the first.

Sonny Smith, 38 from Portland, Oregon, was peeved that he didn't get an invitation to a family wedding.  But his father and brother were invited.  So Sonny did what any thinking American would do.

He phoned the airport from which his brother and father were leaving for the wedding and said there was a bomb on their plane.

Sadly, Sonny made the calls from his mobile phone.

Two years in the slammer.

Have a wry and dry weekend.