Irreverently reviewing the week
Home » What Are You Looking For? » Wry & Dry » No. 22 FY-20 » A jolly 70th at the palace. A PISA what? Who needs reality TV when...
Load Previous Article

A jolly 70th at the palace. A PISA what? Who needs reality TV when...

A jolly 70th at the Palace

Readers would have been aware of the 70th anniversary party for the founding of NATO.  Or more accurately, had it not been for the antics of I-Want-Europe-to-pay-more-Trump, the Party at the Palace may have passed unnoticed.

Looking at the DRS [1], it would seem to Wry & Dry's tin ear and rheumy eye that the woke Prime Minister of Canada, Justin Trudeau was taking the mickey out of I-Want-Europe-to-pay-more-Trump.  He was in the company of serial mischief makers Borisconi and Princess Anne, both of whom would have not discouraged further trouble-making.

M. Macron was also in the huddle, not sure whether to join the laughing or not, as he was pondering how he was going to get back to Paris with most of France on strike (see more, below).  Perhaps he might borrow Greta Thunberg's boat and sail across the channel.

But it didn't take long for the three stooges' DRS vision to be beamed around the world and across the galaxy.  And into the hands of the glass-jawed I-Want-Europe-to-pay-more-Trump.  Wry & Dry posits that he had two choices as how to respond.

There is a trip for two to London for the first correct answer from Readers as to how he responded:

a)  Laugh it all off with a quick and appropriate witticism, showing both his self-effacement and his self-confidence; or

b)  Respond in an aggrieved, sulky manner.

A Wry & Dry aside

Wry & Dry ponders that in the pantheon of political put-downs, I'm-really-a-funny-guy-Trump would fall outside the top 1,000.  To make Readers' Friday a little lighter, Readers may wish to ponder:

“I suppose the honorable gentleman’s hair, like his intellect, will recede into the darkness.”  Paul Keating on Andrew Peacock

“He would kill his own mother just so that he could use her skin to make a drum to beat his own praises.”  Margot Asquith on Winston Churchill.

“He’s just a shiver looking for a spine to run up.”  Harold Wilson on Ted Heath.

“An empty taxi arrived at 10 Downing Street and when the door opened Attlee got out.”  Churchill on Clement Attlee.

Einstein, who was a smart lad, once said: "Education is what remains after one has forgotten what one has learned at school."

After viewing the results of PISA, the international comparison of exam results in maths, reading and science by 15-year-old students, Wry & Dry senses that Einstein sums up education in Australia.

Readers would have seen that Australia has gone backwards since 2003.  Not only in comparison with other countries but also against our results in 2003.  Down 7%.  We are now at the OECD average.  Only about half of Australian students are proficient in maths.

Well, it's clear that Australia is not spending enough on education.  Readers might consider one statistic: Australian schools have more computers per student (1.5) than any other country.  We need to get that figure up to 2.0.  That's realmath.  And will consolidate our podium position.

Wry & Dry eschews reality TV.  But over Friday night drinks, he hears colleagues exchange views on bachelors, bachelorettes (whaaaat?), houses, love islands, etc.  Wry & Dry is sure that they know there is nothing 'real' about reality television.

So much better to watch the real revelations of a cohort of once-young women who claimed to have, err, shared non-exclusive, short-term and possibly arm-twisted arrangements with HRH Prince Andrew, Duke of York [2].

All of this atop the Prince's rehabilitative-intending interview on BBC television.

This sort of stuff employs people.  There must be thousands of formerly-idle wannabee-award-winning-journalists now doing some serious research into the Prince's past.

Wry & Dry wishes to assure Readers that as a result of this research there will be a television series.  The folk at Netflix have extended their series The Crown, and named it The Duke of... oh, never mind.

[2]  The Duke of York is a title traditionally given to the second son of the monarch.  Oddly, except for its first creation, every time the Dukedom of York has been created it has had only one occupant, that person either inheriting the throne or dying without male heirs.  As Prince Andrew is eighth in the line of succession and has only daughters, it is probable that the title will lapse on his death.  Unless he remarries (odds?) and has a male heir.   Wry & Dry suggests that the next Duke of York will be Prince Louis.

It may have escaped Readers' notice but in the week after its Austrac anti-money laundering humility, Westpac scooped up major gongs at the adverting industry's annual awards night.

Marketer of the Year; Best TV Campaign and the B&T Award for Bravery were all for or about Westpac.

This is all about branding.  Astute Readers would have noticed that in Westpac's latest annual report, it's goodwill was valued at $8.895 billion, with an additional $670m in 'brand names'.

Wry & Dry looks forward to the impairment in the next annual accounts.

Another one bites the dust

Wry & Dry thought she possessed that one big advantage: a two syllable surname.  But then again so does Biden, Harris and Sanders.  Perhaps a single syllable surname would be the only way to oust I've-a-single-syllable-surname-Trump.  The most recent in that category were Republicans: Bush, Bush, Ford, Taft and Grant.  Wry and Dry had to go back to 1849 to find the only single-syllable Democrat: Polk.

Wry & Dry is speaking to his people in the Yoo-Ess-Ay to find a single-syllable-surnamed-wannabee president of the Yoo Ess Ay.

Readers would have read that the PM Jimmy Morrison has reduced the number of federal government departments from 18 to 14.   Far be it for Wry & Dry to pass judgement on any reduction in the size of the public service.

One of the new mega-departments is Agriculture, Water and the Environment.  Considering the benefits of smaller government, more efficient delivery of services and greater accountability, former Deputy PM, Barnaby Joyce said, "the mega department would create confusion over which ministers would have seniority."

Wry & Dry is pleased that Mr Joyce hasn't lost his capacity to focus on the bigger issues.

Bloomberg, the American news and information services company, has announced the Top 50 People Who Defined 2019.

Wry & Dry is not quite sure who or what can define a year, other than counting from the date of Christ's birth.  But nonetheless, Bloomberg has had a go.  Its list includes the US women's National Soccer Team, seemingly because 15.6 million Americans watched its second consecutive FIFA Women's World Cup.  Wry & Dry is not sure how that helped define 2019.

But Wry & Dry did like the inclusion of Mette Frederiksen. In June she became the youngest person to lead a Danish government, then two months later wittily drew President Trump’s ire by saying Greenland wasn’t for sale.

It had been quiet out there.  Too quiet.  And so it came as no surprise that M Macron's courageous [3] pension reforms would cause a metaphorical storming of the Bastille.  The reforms essentially increase the pension age from as low as 50 up to 65.

The public sector walkout is likely the biggest in almost a quarter of a century.

It was called by the Communist-aligned CGT labour federation.  Readers will know that going on strike is national past-time in France.  This is podium finish stuff. 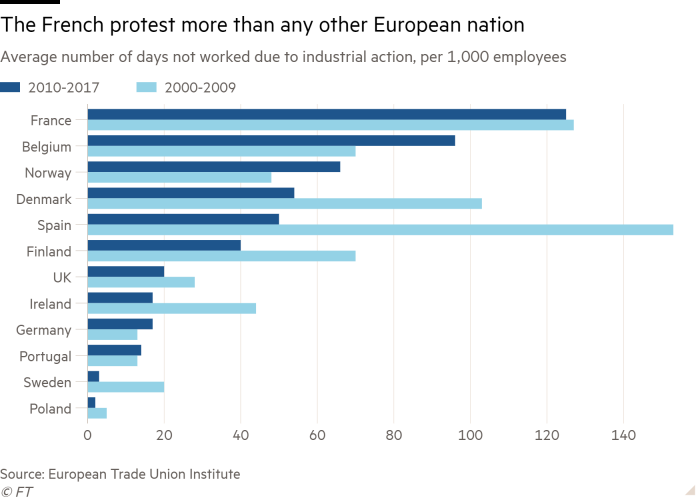 Meanwhile, the astute folk at Extinction Rebellion have added their touch to the strike. They sabotaged thousands of e-scooters by painting over the QR codes that smartphone users scan to unlock the vehicles.

New vehicle sales in Australia fell by 9.8 per cent in November, compared to a year ago.  This is the 20th consecutive month of new car sales' decline.

Wry & Dry comments:  Wait for those summer sales - if the dealers are still open.

2.  Australia's GDP up by less than expected

The Australian Bureau of Statistics on reported annual GDP lifted by 1.7 per cent

Wry & Dry comments:  The quarterly result (September) was less than expected. Wait for those summer sales - if the shops are still open.

Australia has recorded its second consecutive current account surplus - the first in 46 years.

Hong Kong's retail sales in October fell by their steepest on record, sliding 24.3% to HK$30.1 billion ($3.85 billion), as ongoing anti-government protests gripped the city. Tourist arrivals also plunged 43.7% from a year ago to 3.31m, according to the Hong Kong Tourism Board.

5.  US cements status as oil exporter

Amid the shale boom and President Trump's drive for American energy independence, the U.S. has posted its first full month as a net exporter of crude oil and petroleum products since government records began in 1949.

Wry & Dry comments:  Analysts at Rystad Energy predict the U.S. is only months away from achieving total energy independence, citing surging oil and gas output, and the growth of renewables.

“Sadly, but with confidence and humility, with allegiance to our founders, and a heart full of love for America, today I am asking our chairmen to proceed with articles of impeachment.”

-  Nancy Pelosi, Speaker of the US House of Representatives, requesting the House to proceed with impeaching President Trump.

Nancy is neither sad nor humble.

...beamed as Wry & Dry opened the door of the jalopy.

“Ah you seem in good spirits, Deepak,” Wry & Dry said as he jumped in.

“And the family?” Wry &Dry asked, submerging into the well-worn upholstery of the backseat.

“It’s not just one but two,” Deepak announced proudly.

“Two?” Wry & Dry scratched his head for a moment, before a large exhale, followed by a “mamma mia, twins?”

“Ah, and it is a rare thing indeed in India.”

“Really?” Wry & Dry again pondered a plethora of questions, some less fitting than others.

“Does mother-in-law Damshi know?” Wry & Dry asked, having settled on one line of inquiry at last.

“Well, no. We decided that there are some things that should wait, you know. An added surprise when we announce the gender to all the relatives and friends at once.”

“I see,” said Wry & Dry circumspect. “You don’t think she may like a little heads up before the day of the big reveal?”

“She may like it, but she’s not getting it,” Deepak snapped. “I’ve had quite enough lately with her waving around the big stick. She needs to remember her place.  I am a father of three after all.”

“Ah huh,” Wry & Dry said, unsure of the logic but happy to go along with it all the same. Deepak puffed out his chest proudly.

It’s amazing what fatherhood will do, Wry & Dry thought, as he considered his far-flung brood contentedly.

“Just remember Deepak, three under two years old will be a handful, I think Damshi may be needed. Might I gently suggest you make peace with her, and allow her the odd victory?”

Deepak looked thoughtful as he slowed down to the curb side.

Wry and Dry stepped out into the sunshine and smiled.