Wry & Dry always wondered what it would take for the weekly headlines not to include some or all of: I'm-A-Headline-Trump, Brexit, Borisconi, Jezza, Barnaby, a Tsar, an Emperor, a Sultan or even a (Wayne) Swan.

But in the ultimate victory of the bizarre, this week it's about a ... bank.  Australia's oldest: Westpac.

The court of public opinion is not to be ignored.  It's opinion is rarely founded upon reason.  Or justification.  It's just about the emotion of the day.  The mob wanted a Westpac head on a spike at the gates.

Had the eminently logical, calm and sensible Chairman Lindsay Maxsted listened to Wry & Dry and given his woke CEO Brian Hartzer the DCM on the spot, he might well have kept his own seat.

But, no.  And so both join that now very over-crowded place: the Bankers' Graveyard.

A Wry & Dry aside

Wry & Dry still remains perplexed at the want of media focus on the former CEO, Gail Kelly.  This Austrac mess was well underway in her tenure.  But, let the record show, she has scarpered.

Wry & Dry had a listening device inside Emperor Xi's office in Zhongnanhai [1], which picked up the following conversation on Monday morning.  It explains Emperor Xi's cunning plan to regain control over Hong Kong: garbage.

Emperor Xi: No, English Breakfast Tea.  The Brits at least got that right.

Emperor Xi: What, has the stock market fallen?  Am I worth less?

Lackey:  No, majesty.  It's the elections' result.

Emperor Xi (angrily):  Elections?  What is an election?  I know of no such word.

Lackey (patiently): Majesty: an election is a process whereby people vote for other people to do what you tell them to do.

Emperor Xi: So, what's this got to do with me?

Lackey:  Majesty, it was the Hong Kong local council elections.  The capitalist pro-democracy running-dogs gained control of 17 of the 18 local councils.  It's a disaster for Comrade Carrie Lam, your Hong Kong puppet, err, equivalent.

Emperor Xi: What do local councils do?

Emperor Xi:  Perfect.  I need them to fail in this task.  Order our Hong Kong Black Operations Team to go around every garbage night and turn over all of the rubbish bins in those 17 council districts.  And to keep doing this until the next election.  By then the voters would have had enough and they will vote out those pro-democracy capitalist running-dog traitors.

Lackey: But, majesty, the next elections are not until 2023.

Emperor Xi:  Perfect.  The stench will be amazing.   The pro-democracy capitalist running-dog traitors will spend so much time fixing up the rubbish collections they won't have time to demonstrate.

[1] Zhongnanhai is a compound next to the forbidden City in Beijing, that serves as the headquarters for the Communist Party of China.  It is roughly equivalent to the White House.

Many Readers are probably wondering who is Michael Bloomberg?  Allow Wry & Dry to observe that he is the Nth Democrat, where N is a large number, to put up a hand to run against I-Want-Four-More-Years-Trump.

But Mr Bloomberg has a seriously special quality.  He is as rich as Croesus, with some US$58 billion in his piggy bank.  But he is also the thrice elected Republican mayor of New Yoik.

Wry & Dry welcomes his candidacy.  The world needs more uncertainty.  And suggests that he leverage this uncertainty and morph his multi-party past to multi-party present.  And stand for both the Republicans and the Democrats.

Readers know that interest rates are at all-time lows.  In the US stocks pay dividends at most half of what they are in Australia.  And so other places to obtain a decent interest rate are keenly sought, to the point of the ridiculous: car loans.

Retail investors are pouring into sub-prime auto asset-backed securities (ABS).  These ABS are bundles of loans to people to buy cars or trucks.  And the demand is such that the rate of return is just 0.9% higher than the rate at which the government of the Yoo-Ess-Ay can borrow.  Wry & Dry says again: these are sub-prime loans.

Wry & Dry is not raising the red flag.  Yet.

South Africa’s state-owned flag carrier is on the brink of financial collapse after it paid only half of staff salaries this month and struggled to secure funds to survive.

Earlier in November SAA's flights were grounded as a result of a strike by unions, protesting at job cuts.  So, how many job cuts do you really want?  100%?

Focusing on the big issues

I'm-in-Charge-Of-Everything-Trump decided to overrule a military decision to demote and de-signify a Navy Seal (the Seals are the elite branch of the US military, roughly equivalent to the SAS or SBS).  And he fired the US Navy Secretary for having the temerity to proceed with the demotion, etc.

The Tweet said it all: “The Navy will NOT be taking away Warfighter and Navy Seal Eddie Gallagher’s Trident Pin.  This case was handled very badly from the beginning. Get back to business!”

Wry & Dry wonders who should get back to business?  And 'Warfighter'?  Really?

A Wry & Dry family member is in the manufacturing business.  And had a complaint from a customer.  The customer was really, really aggrieved.  And said he would take the company to Consumer Affairs.

Family member: "But we have dealt with all of the issues that you complained about.  And made that clear in the email."

Grumpy customer: "But in the email you did not address my hurt feelings."

Wry & Dry is offering a trip for two to London for the first Reader to correctly name the generation of the complainer:

Not that anyone's afraid of a UK Labour government, but...

Readers will know that the moves will not stop the nationalistion of the businesses, but because Switzerland, Luxembourg and Hong Kong have bilateral investment treaties with the UK, investors will be paid properly in the event of nationalisation.

Wry & Dry understands full well that this is a corporate response to Jezza, and it won't be the last.  Moreover, somewhat below the radar, Wry & Dry's man person in London advises that some billions of pounds of investment assets have already left the sceptr'd isle for other jurisdictions.

Wry & Dry sadly notes the passing of one of Australia's greatest exports: Clive James.  Best known for his dry and piercing wit, James was a rare creature in his sphere, a self-effacing gentleman.  He described his writing talent as merely, "All I can do is turn a phrase until it catches light."

His autobiographical works: Unreliable Memoirs, Falling Toward England, May Week Was in June, North Face of Soho and Blaze of Obscurity, are expositions of wordsmithing rarely found in modern times.

But Wry & Dry found deeper pleasure in his deeper works: specifically his Cultural Amnesia, a collection of essays on 106 interesting people, ranging from Louis Armstrong and Tony Curtis to Camus and Proust.

His word-craft was of Gower batting, with the subtlety of Mozart's clarinet concerto and the use of words as a 19th century impressionist might use patterns of light.

A couple of weeks ago Wry & Dry alerted Readers to the increased unhappiness of a range of folk in the Near East about Iran's external meddling and internal brutality.  The unhappy folk were in Yemen, Syria and Iraq, and Iranians themselves.

Well, yesterday protesters burned down an Iranian consulate in southern Iraq: another example of popular anger over Tehran’s alleged interference in Iraqi life. This is the second Iranian consulate that has been targeted during weeks of anti-government demonstrations.

Déjà vu all over again?

Wry & Dry loves a love story.  And knows that love conquers all.  Which explains why a picturesque 17th-century convent in the Tuscan hills has had to shut its doors.  The reason for the sudden closure is reported to be because a 40-year-old nun fell in love with a local gent, and was obliged to leave the convent.  This left too few nuns (3) to run the convent.

Wry & Dry isn't sure what the Tuscan Workplace Occupational Health & Safety regulations require, but to run the place (see picture) with even four nuns would seem a tall order. 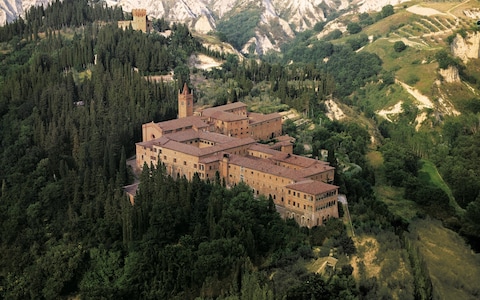 With its gorgeous location and views, Wry & Dry wonders if an international hotel chain might purchase the site.  Although there doesn't seem to be much room for the 'Trump Convent' sign.

The global trade slowdown is hitting the EU the hardest, according to new OECD data.  Exports and imports declined across all major EU economies, with falls of 3.6% and 1.7% respectively in France, and of 0.4% and 1.8% in Germany. In Italy trade dropped for the sixth straight quarter: exports decreased 1.2% and imports slipped 1%.

Wry & Dry comments:  And they are worried about Brexit.

2.  US economic growth revised up

The US economy expanded at a 2.1% annualised rate in the September Quarter, which is up from the initial estimate of 1.9%.

3.  US consumer confidence is down

US consumer confidence dipped in November to 125.5 from 126.1, falling again during a period that includes part of the critical holiday shopping season.  It was the fourth straight monthly decline.

Wry & Dry comments:  Another canary in the coal mine?

Bitcoin euphoria is wearing off fast as the currency plunged another 10% overnight to below US$6,600 on concerns about a crackdown on crypto operations by China.

Wry & Dry comments: The Peoples' Bank of China (China's central bank) is warning investors not to conflate the technology with crypto-currencies.

Shares of the ride-hailing giant declined 6.4% after the company lost its license to operate in London for the second time in two years. While its services won't immediately be blocked, it is a major blow to Uber, which must now appeal the decision and prove its safety record.

Wry & Dry comments:  Do battle with the London cabbie at your peril.

“President Trump has very little understanding of the military, does not know how to fight ethically and cannot be governed by a uniform set of rules and practices."

-  Richard Spencer, until being given the DCM by Trump earlier this week Secretary of the US Navy, commenting on the President's interference in a military matter.

Unable to drive today.  Anjali is terribly ill with morning sickness, so I am at home looking after Amulya.  I have some exciting news, and you may have had a point last week about my mother-in-law and the bricks….  I’ll explain next week.  Kind regards,  Deepak

Investment Matters
A new COG in the machine