Sigh. What does the onset of Melbourne's winter [1] bring to Wry & Dry's mind:

a) the same weather as Melbourne's summer: rain, sun and wind on the one day, but it's 20 degrees colder;

b) the rush to appease his accountants before the end of the month, so they themselves can appease the parsimonious folk at the Tax Office (an ultimately fruitless task);

c) the memory of Melbourne 2020's lockdown winter; or

d) all of the above?

Close, but no cigar. The correct answer is c).

The misplaced hysteria of this week's Melbourne now 14-day lockdown has stoked the dying embers of Victorian's memory of the 163 days of Chairman Dan's 2020 lockdown.  And of the depression. And of the small retail and other businesses who are close to or who have already gone to the wall. Gone is the "flatten the curve" objective.

Now it's all about confected heroism: 1. amplify the problem; 2. create hysteria (aided by the media); 3. play the cavalry; 4. take the applause; 5. win the election.

The policy of the Victorian government to create a climate of fear in the population was laid bare yesterday. The justification for the second week of lockdown was that the latest variant is significantly more contagious than previous outbreaks. Err, no. "There is no epidemiological evidence that this virus spreads faster... I don't think it is helpful to seed alarmist or doomsday-type thoughts into the community," said Professor James McCaw, an infectious disease expert.

Chief Health Officer Brett Sutton had described the virus as "an absolute beast" that was "spreading in settings we hadn't seen before."

The use of fear to control a community is an amazingly successful technique. Readers who are students of history well know this. And it is again being used by the government, to ensure acquiescence.

Sigh (again). When will this lockdown cycle end?

[1] In Australia, unlike the UK, the seasons commence on the first day June, September, December and March, rather than on the solstices and equinoxes.

Wry & Dry's respect for public servants has increased immeasurably. South Australia's chief health officer, Professor Nicole Spurrier, has given the ideal advice to football followers going to the Adelaide Oval for the Adelaide versus Collingwood game: "do not touch that ball."

This is not about coronavirus. It's about Collingwood supporters trying to steal the ball.

They have been warned.

At least the facemask police in Melbourne are polite.  Tsar Vlad has moved to a podium position in the United Nations Make-People-Wear-Face-Masks Contest.  Click here for the Soviet Method:

Borisconi and his girlfriend Carrie Symonds had their nuptials last weekend. All a secret, of course. So, it's goodbye Carrie and hello Mrs. Johnson.

She's now the PM's wife. They already have one offspring (≥ 6 for Borisconi), will there be more? A sort a spare to the heir.

Of course, her utterances need to be opaque and following the party line. The issue will be, as Readers know, that she is quite an environmentalist.  She can certainly make speeches about saving the red squirrels (though it does involve taking a view on grey squirrels) but she may have to lay off contentious issues. Girlfriend errors are forgiveable, but as the PM's wife, she cannot be Carrie Antionette.

On the bright environmental side, she’ll hit it off with Prince Charles.

Snout pinched in the trough

Readers will be aware of the shameless attempt by Queensland federal MP George Christensen to ensure that his resignation morphed into a DCM from the Queensland LNP State Executive. This would mean that he would be entitled to a $105,600 'resettlement allowance'.

Well the party officials have pinched George's snout before it could get to the trough. Thereby saving we-the-taxpayer a small amount of dosh. And the principle is now clearer.

Invade between the flags

It's all very well for PM Jimmy Morrison to beat his hairy chest to Emperor Xi Jinping. But before he pushes any buttons, he might consider that a call to arms might be met with sound of crickets. Readers might consider:

Emperor Xi might contemplate a practice run of invading Australia before Taiwan.

In its defamation case against Federal MP Christian Porter, the ABC said that it would conduct itself "as a model litigant" throughout the matter. That is, it as a government body engaged in litigation.

Well, that undertaking fell at the first hurdle. A nanosecond after the matter was agreed to be settled, Four Corners Executive Producer Sally Neighbour tweeted: "Breaking now: Christian Porter is dropping his case against the ABC. No money was paid. We stand by our stories..."

Ms Neighbour, in her quest to appear triumphant, had made three errors someone in her position should not have made.

Firstly, the matter was 'settled', an outcome of which is the dropping of the case. Ms Neighbour: save the tabloid headlines for the tabloids.

Secondly, she did not wait for Judge Jayne Jagot to finalise the matters (by issuing Consent Orders). The ABC's lawyers then had to issue an abject apology to Her Honour.

Thirdly, the ABC did agree to pay for Mr. Porter's share of the mediation costs, small as they were.

These may seem niceties. But the ABC is a government body. And we-the-taxpayer should expect not only accuracy but also respect for the dignity of legal proceedings.

As for Ms. Neighbour's triumphalism: a somewhat undignified outburst that we have come to expect from her neck of the media.

Wry & Dry wonders why there was such one-sided hysteria last week, when 243 people died in Gaza and only 13 in Israel. Hamas fired over 3,000 rockets at Israel - but for Israel's Iron Dome, the Israeli death toll would have been massive.

But Wry & Dry guesses even that would have not aroused sympathy.

To see the Iron Dome in operation, watch this video.

Readers of classical Greek will be pleased that the World Health Organization is renaming coronavirus variants after letters of the Greek alphabet, instead of the place of their first discovery.

The four types of coronavirus known by the public as the U.K., South Africa, Brazil and India variants have now been assigned the Greek letters alpha (α), beta (β), gamma (γ) and delta (δ).

Wry & Dry expects that millennials will wonder what the heck is an alpha coronavirus? Perhaps like an alpha male?

And now that Martin Foley, the Victorian Health Minister, has blamed "the South Australian outbreak" for the woes in Victoria, is this a new and fifth coronavirus type?

And so to be named the epsilon (ε) variant. Which is boring; perhaps better to wait around for the sixth letter, the exciting zeta (ζ). Which would lead to it being called the Catherine variant.

This is great quadrant chart, courtesy of the AFR (31-May-21). It readily shows how 'fossil fuel economies' are placed to manage Net Zero. The place to be is in the bottom, left-hand quadrant. This is where Australia is found, with low exposure to Net Zero and high resilience.

Yes, for obvious geopolitical reasons, about Iran, Iraq and Venezuela in particular. 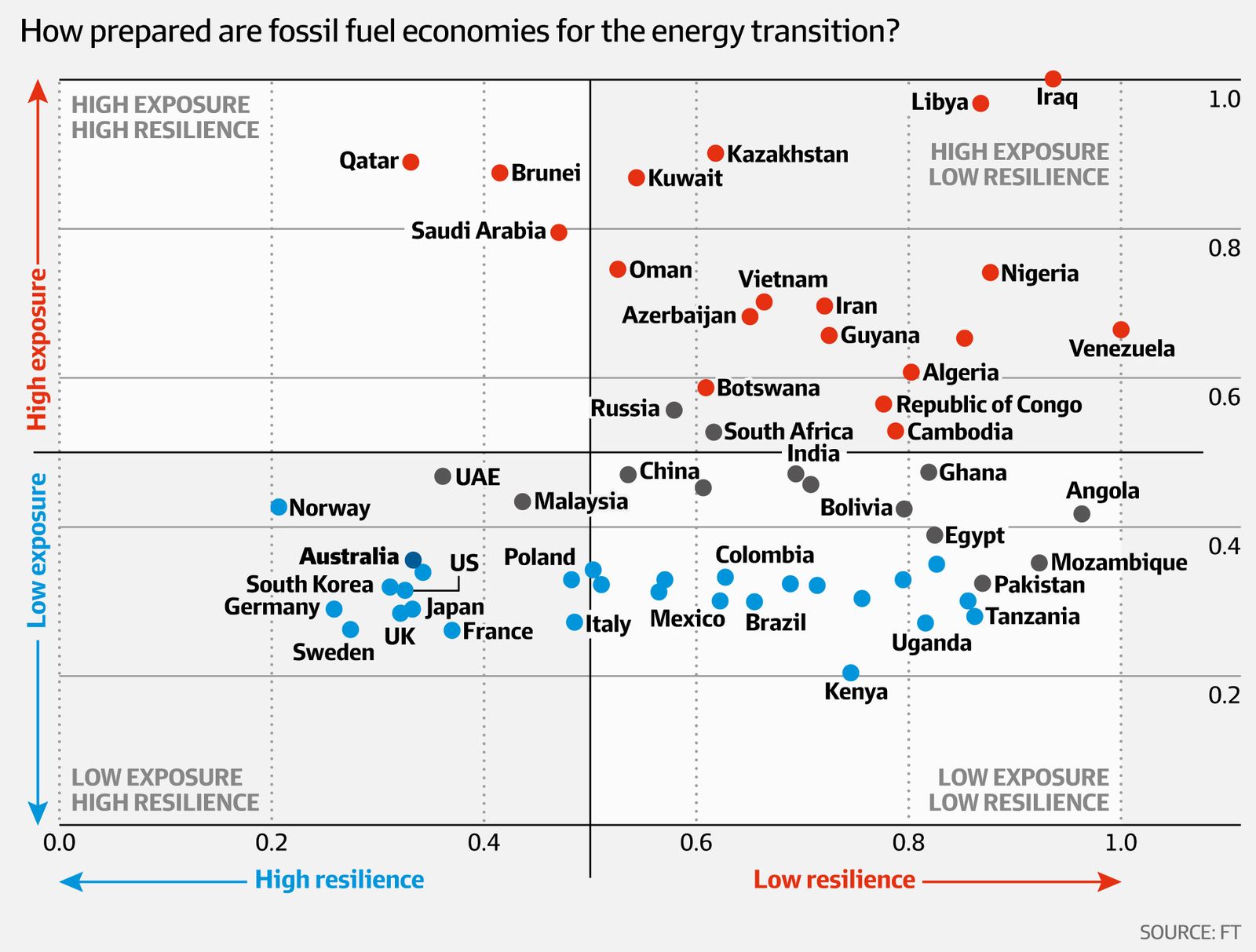 Britain is poised to strike a post-Brexit trade deal with Norway as soon as Friday, with further agreements with Iceland and Liechtenstein expected soon afterwards.

The Australian economy expanded in the March quarter, data from the ABS showed. GDP grew by 1.8% on a quarterly basis in the first three months of the year, taking annual growth to 1.1%. Economists had been expecting 1.5% and 0.6% respectively.

Wry & Dry comments: Triumphant shouts that Australia is only one of six economies (with China, Chile, Romania, Lithuania and South Korea) that have surpassed their pre-pandemic levels (December 2019) are misplaced. Whilst that fact is true, Australia has enjoyed two summers when coronavirus is more dormant (like Chile) and has the advantage of easily closing our economy (like China and South Korea). Data for Lithuania and Romania are a mystery to Wry & Dry.

Nestlé has privately accepted that more than 60% of its 2,000 products are not healthy and some never will be.

Wry & Dry comments: Really? No surprise here. Will Coca Cola or McDonalds put up their hands for the 100% unhealthy ranking, please?

Australia’s competition regulator has declared victory in a three-year battle to make Facebook and Google pay for news after the internet groups signed deals with publishers that could be worth about A$200m a year.

Wry & Dry comments: A mere pittance to these companies.

On Tuesday, the RBA held the cash target rate at a record low of 0.1%.

Wry & Dry comments: The RBA, in its statement made a Captain Obvious comment: "There has been increased borrowing by investors."

“If states like NSW can manage outbreaks and keep the state open while facing the exact same risk factors as Victoria, then why can’t Victoria do the same?”