There's a bit of German Ei im Gesicht [1] about the EU Covid vaccine rollout, that is becoming more obvious with each passing day.

Readers will remember that it was German Chancellor Angela Merkel who last year instructed the German health ministry to hand the vaccine fulfillment to the European Commission (the EU's ruling executive). Then Ursula von der Leyen, the German EC President, entrusted arguably the most important task in EU history to Stella Kyriakides, a bureaucrat from Cyprus, qualified in psychology but not in anything resembling the task.

Kyriakides defended the EU joint procurement strategy on the basis of "medical and social virtues".  Err, what?

Outcome: the EU successfully managed to order a vaccine developed in Germany almost four months later, and approved one month later, than the UK. The time gap allowed the UK to lock-in a contract that had provisions to supply the entire UK from AstraZeneca's UK plant.

Whereas the EC's contract could only achieve supply on a 'best endeavours basis'.

This morning Italy blocked a shipment of 250,000 doses of the Oxford-AstraZeneca vaccine from being flown to Australia. The story is that AstraZeneca applied on 24 February for an authorisation for the shipment. Two days later, Italy told the European Commission it intended to deny the application. In view of the shambolic vaccine rollout in the EU, the EC of course did not object. Italy duly notified AstraZeneca of the denial on Tuesday.

Italy's decision shines a searchlight on the incompetence of the EC, the desperate and growing vaccine nationalism, and the façade of a united Europe.

The new Prime Minister of Italy, Mario Draghi, was keen to show a hairy chest and glistening biceps. Has Italian nationalism been re-ignited? Can Readers now expect an invasion of Abyssinia, err, Ethiopia? [2]

[2]  In 1935, a predecessor of Draghi was also keen to shown a hairy chest and glistening biceps. Benito Mussolini invaded Abyssinia, now Ethiopia, in what became known as the Second Italo-Ethiopian War. In so doing, dropped over 300 tons of mustard gas in an attempt to subdue the largely rural country. Mussolini was keen to avenge humiliating Italy's defeat in 1896 in the First Italo-Ethiopian War. Ethiopia is the only surviving African state to successfully defeat a European colonial power in open battle.

Wry & Dry sometimes strays north of Hadrian's Wall to review the latest Scottish attempt at economic suicide. That suicide is, of course, the Quixotic desire for independence from the rest of the UK. But for many Scots, the emotion of being an independent country overcomes the economic reality that would come with independence. Wry & Dry's experience is that alcohol leads to emotional decisions. And hesitates to draw a link to Scotland being the home of the one of the world's most potent and popular alcoholic beverages.

That said, the independence move was roundly defeated in a referendum in 2014. However, the ambition of Nicola Sturgeon, the now Scottish First Minister, for her name to go in the history books at the person who led the Scots to be the Promised Land is overwhelming common-sense. Political ambition is a risky business [3].

But fighting between Ms. Sturgeon and her predecessor and former mentor, Alex Salmond, may dash her hopes of a victory at the upcoming Scottish elections. She is facing calls to resign for repeatedly misleading the Scottish parliament. The matter is complex, and has to do with allegations of sexual misconduct (later dismissed) by Mr. Salmond. All of this might derail Ms. Sturgeon's ambition to be a Georgina Washington. [4]

However, if ever there is independence, Ms. Sturgeon might end up a Roberta instead of a Georgina.

[3]  Ask Julius Caesar.  "... as he was valiant, I honour him: but, as he was ambitious, I slew him. There is tears for his love; joy for his fortune; honour for his valour; and death for his ambition."  Brutus, speaking to 'a throng of citizens' in the Forum after Caesar's murder.  Shakespeare: Julius Caesar, Act 3, Scene 2.

[4] The last two now countries to make unilateral declarations of independence from the UK were the Yoo-Ess-Ay (1776) and Rhodesia (1965). The former succeeded economically, aided by massive migration from Europe, a generous climate and topography, and a desire for small government. The latter became Zimbabwe, became politically tribal and became, under Robert Mugabe, an economic basket case.

Yesterday's headlines referring to a 'V' shape could only mean one thing. The return of the 'Big V', referring to the guernsey (or player strip) worn by AFL players chosen to represent the State of Victoria in games against other, lesser, states. [5]

Err, no.  The 'V' shape all over the media was the V shaped economic recovery. Australia's GDP grew by a stunning 3.1% in the December quarter. This followed a 3%+ growth in the September quarter.

Hats off to Treasurer Josh, who was justifiably excited. Especially that it placed Australia at the top of the developed world economic tree for 2020.

But one swallow doesn't make a summer. Post-Covid, Australia's modest economic conditions pre-Covid will resume, that is: good, but held back by low business investment and low productivity. PM Jimmy Morrison didn't have the ticker to make the most of the crisis and undertake some fundamental economic reform. The iron-ore boom that is pouring squillions into the general coffers of the federal and WA government cannot last.

Jimmy doesn't care, the next election will have come and gone before it is apparent that he rested on his oars.

[5]  And not the semi-professional Victorian basketball league. The last serious Big V game was in 1989 at the MCG, when 91,000 saw the Big V belt South Australia by 14 goals. Lockett, Dunstall, Brereton and Lyon were in the forward line.

It is sad to observe the low depths to which Australian politics and media have descended this week. The witch hunt [6] that has metaphorically imprisoned government minister Christian Porter over unprovable allegations brings shame upon the hysterical witch hunters.

The lynch mob are, of course, led by the media, especially those of a self-righteous mindset, and by social media hanging judges. And the vengeful pouring of petrol on the flames by former PM Croesus Turnbull was a most unworthy action. He is to be condemned.

Readers will remember former PM Abbott's response when Bill Shorten in 2014 found himself in a similar position to Porter. On Shorten's 'self-outing' and denial of accusations, Abbott declared the matter closed. This contrasts with Leader of the Opposition Anthony Albanese's desire to see 'further action'.

Albanese was and is the only person who could shut down the tribal hysteria. And in not so doing, he showed his mettle.

Meanwhile, journalists are phoning around, searching for those who (a) knew; (b) thought they knew; (c) might have known; or (d) once met Porter when he was aged 17.  Expect the weekend papers to be full of the results of their research.

[6]  Witch hunt: an investigation that is conducted with much publicity, supposedly to uncover subversive activity but with the real purpose of intimidating political opponents. It can also involve elements of mass hysteria.

Readers would have been revolted by China's ongoing and heavy-handed intervention into Hong Kong. Any hint of free speech has a boot thrust on its throat, for example this week's arrest of 47 'pro-democracy' activists.

Wry & Dry sees more than Emperor Xi trying to bring Hong Kong to heel. He might be fighting for his political survival. He needs a signature victory (sitting on Australia is not one of them).

Y'see, Emperor Xi is failing in key areas. His claim to have eradicated poverty was given the lie by Premier Li, who said that some 43% of the population "didn't have the income to rent a room in a medium Chinese city."

The accidental Belt and Road Initiative is bogged in the sand of debt distress. Economic growth has been falling since 2010. Corruption has worsened.

As for the future, China's rapidly falling birth rate is, well, a problem. Compounded by the fact that no-one wants to emigrate to China from elsewhere.

The blue area is when China’s one child policy was in place. Chart: The Times and The Sunday Times • Source: China’s National Bureau of Statistics/World Data; World Bank.

So where is the quick win? It's not Taiwan, where a forceful military move would be disastrous.

The only trophy he can bring home is to merge Hong Kong back into China. By any means.

But he may have bitten off more than he can chew. The Cantonese are more creative than the stolid Mandarins. Hong Kong will be a stone in Emperor Xi's shoes for many years.

For a cricketer, to score a century is a good thing, providing much satisfaction. But for the UK Chancellor of the Exchequer (i.e. Treasurer) to preside over public debt/GDP of 100% is not a happy thing. In releasing the Borisconi government's budget yesterday, Chancellor Rishi Sunak was forced to announce the century of debt/GDP would be by 2025, the highest since the early 1960s.

The below chart tells the story - not of the massive spending to ameliorate the effects of Covid, but of the fiscal largesse that occurred in the UK between 2006 and 2015. This indulgence gave the current UK government little room to move. This contrasts considerably with Australia, where the tight purse strings managed by then Finance Minister Matthias Corman gave current Treasurer Josh much more room to move.

The chart is of UK public debt. 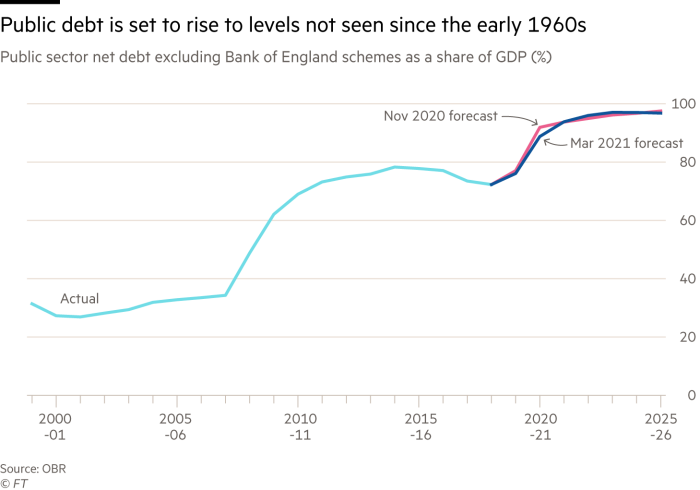 Readers will be aware of the absurd prices being paid for investments these days. Tesla, After Pay, Bitcoin, etc. are all changing hands at prices driven by the FOMO principle.

But an artist he wasn't. Yet someone with more money than sense this week paid US$11.6m for Churchill’s 1943 “Tower of the Koutoubia Mosque”, the subject being Marrakesh's 12th century mosque, the tower of which rises up against the snow-capped Atlas Mountains.

Churchill gave the painting to President Roosevelt, from whence it eventually ended up in the collection of Brad Pitt and Angelina Jolie. That couple apparently divorced and Ms. Jolie put it up for auction this week.

Even former Presidents can be guilty

There's a weirdly American doctrine that says that an American President cannot be charged for any actions whilst in office (other than by impeachment).

Not so in France. Former French president Nicolas Sarkozy has just been found guilty of corruption and influence peddling. Three years in the Bastille [7], suspended for two years. He will appeal.

[7]  Not really. The Bastille was actually a fortress, sometimes used as a prison. It was destroyed some months after it was symbolically stormed in the French Revolution (1789). And if the appeal fails, he will serve time with an electronic ankle bracelet.

The price of oil climbed to US$64, the highest since April last year.

Australia has recorded its largest trade surplus on record

Wry & Dry comments: This is 37 consecutive months of a trade surplus. And, yes, it's mostly about iron ore and coal going out and not as much coming in.

The Head Teller of the RBA decided to leave cash interest rates unchanged at 0.1%.

Wry & Dry comments: The Head Teller will soon be like King Canute, stuck in the rising tide of inflation.

Volvo, an Indian-but-people-think-Swedish-owned, vehicle manufacturer will sell only all-electric vehicles by 2030 and eliminate dealerships and move to online selling.

Wry & Dry comments: Online selling will remove the third-least trusted of all professions. Just got journalists and real-estate agents to go.

Wry & Dry comments: It may get worse. And it's not Brexit - it's a blend of Covid (which will pass) and WFH (which will not).

“The probability of success when day trading is only slightly better than when flipping a coin. There has historically been about a 54/46 chance of making money when holding stocks for a day versus 50/50 from coin flipping.”

Logic never stopped a fool from parting with his money.

It is proper etiquette to ask before jumping on a neighbour's trampoline. It's even more proper to be clothed. Adrian Lee Gonzalez-Bradway, 21, of Florida, Yoo-Ess-Ay, was arrested Wednesday and charged with burglary and criminal mischief.