Irreverently reviewing the week
Home » What Are You Looking For? » Wry & Dry » No. 35 FY-17 » Broken budget flagpole. Irascible meets inscrutable. Up the heat.
Load Previous Article

Budget Blues: Oh, Death.  Where is thy sting?

It's that depressing time of year.  Parliament has risen, so to speak.  And, amid rumours, posturing and a busy flagpole (up which to run speculative budget proposals), now we all await the 2017 Federal Budget.  Err, not really.

Treasurer Morrison's flag-pole, up which he ran one too many budget ideas

But this depressing time is only matched by the period immediately after the budget, when the media carry hectares of analysis of who are the Budget Winners and Budget Losers.  With heart-wrenching photos of the Budget Losers; in uniform, fluro-vest or hospital bed (cue violin and claims of the heartlessness of Croesus Turnbull, the PM).  And accompanied by allegations of the Sky Is Falling from the Opposition and One Nation remnants.

But wait there's more.  It gets worse.  The inevitable RDS sufferers: each of Tony Abbott, John Hewson and Waleed Aly will be wheeled out to give their expert point of view.

Let Wry & Dry give Readers the whisper: the whinging collective of Abbott, Hewson and Aly is irrelevant.  The entire Budget palaver comes down to just what only four people think: Senators Nick Xenephon, Pauline Hanson, Jacquie Lambie and Derryn Hinch.  Treasurer Jim Morrison would do as well as to present his budget just to these four Senators.  Perhaps at a secret solar-powered retreat in the Adelaide Hills.  And leave the rest of us in peace.

In what will arguably be the most important meeting between global leaders since Kennedy met Khrushchev, in Vienna in June 1961, Tsar Trump will, as W&D writes and today, meet Chinese President Xi Jinping at one of Trump's Floridian resorts (Mar-a-Lago).

The irascible meets the inscrutable.

Readers will remember the 1961 Vienna summit, at the height of the Cold War, when neophyte US President Kennedy was handsomely routed by the wily Soviet Premier Khrushchev [1].  Kennedy's Bay of Pigs fiasco (a CIA backed attempt to topple Cuba's Castro) was six weeks earlier.  And Khrushchev saw a man so out of his depth, that he was drowning, not waving.  And made the most it.

Khrushchev thought that anyone who got into the Bay of Pigs mess was ignorant of real-world politics. And anyone who didn’t see it through had no guts.  And so it was.

Two months later the Berlin Wall was built.  The next year was the Cuban missile crisis [2].  The Cold War got hot.  Kennedy was a blouse.

Now consider the politics for the Florida talk-fest: North Korea (which yesterday carried out its sixth successful missile test this year), South China Sea (this morning Philippine President Rodrigo Duterte ordered troops to deploy on unoccupied South China Sea islands, see more below) and Taiwan (the diplomatic-crisis-gift that keeps on giving).  Not to mention the economics: US-China trade and Trump's view that China engages in unfair trade practices.

Khrushchev had been in politics for over 40 years, schooled under that hard man Stalin, when he met Kennedy.  Kennedy himself had been a Congressman for 14 years before becoming President (but it was hardly hardship for Kennedy, who rode on the corrupt fiscal coat-tails of his father).

Xi Jinping has been in politics for over 40 years, schooled in the shocking days of the Cultural Revolution under Mao Zedong.

Tsar Trump has been in politics for 5 months.

Oh, dear.  On with the crash helmets.

Question:  What does the following chart say to Readers? 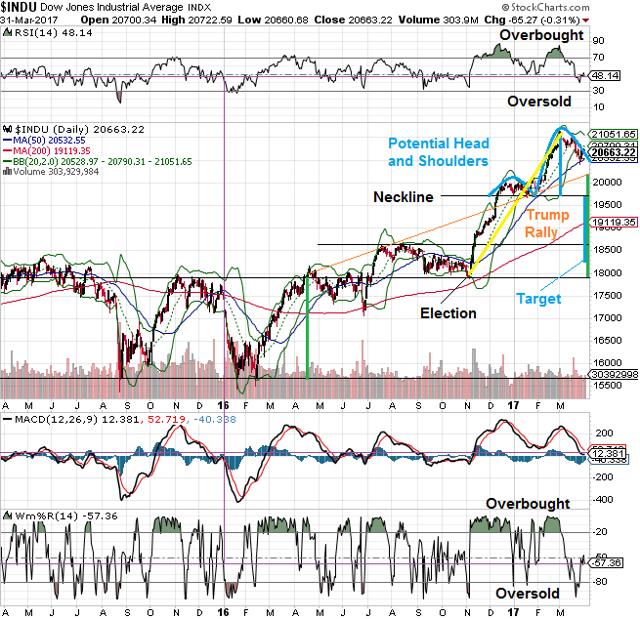 Answer: No, it's not a sewing pattern.  This is the way some serious investors assess how the markets is going to behave in the immediate future.  The practice is called 'charting'.  All it looks at are market trends and attempts to see patterns.  The practice is rife with jargon: for example, chartists would now say they are seeing a 'head-and-shoulders' pattern in the recent performance of the Dow.

Wow!  How about that.  And the bad news is that such a pattern is 'one of the best indicators of a market reversal'.  This chart is predicting an 11.7% fall in the Dow.  Such precision.

W&D has no time for chartists.  W&D could toss a coin, chart the outcomes and a chartist will predict precisely the outcome of the next toss.

W&D is more keen on more fundamental analysis of the S&P500 (the most widely used index of the US stock-market, like our All Ordinaries Index).  Such as the following:

The short story: this is not a good time to buy the US stock market (that's not to say that there are not some stocks that are undervalued).

Readers familiar with the drivers of markets know that there are all kinds of ways to try and rationalise buying an over-valued market.  For example:

W&D's view is that the problem with all of those arguments is that none of them changes reality.  Buying (the US market) now reflects expectations about an unpredictable future that no-one else can see.  Or, more likely, an optimistic reading of the entrails of chickens.

It is never different.  An over-valued market will always correct.

Mrs W&D has, so far, failed to notice that a stunning 59.6 carat flawless 'fancy vivid pink' diamond was sold by Sotheby's in Hong Kong this week for $94m!  Good grief.  This is a global record.

The "Pink Star" was mined in Africa by De Beers in 1999 and cut over a two-year period. In 2013 it was auctioned for a record $109m to a New York diamond cutter, who failed to pay.  The auction house was then forced to buy the diamond itself because had guaranteed a $60m sale price.  Last year, keen to get the diamond off its balance sheet,  Sotheby's sold an unspecified stake in the diamond to two companies, diamond specialist Diacore and New York jeweller Mellen Inc.

And people get excited about the Australian property market.

W&D expects the Real Housewives of Melbourne to start demanding pink diamonds from their fiscally advantaged but will-power weak husbands.

Two of the word's certifiable leaders have raised the world's diplomatic heat this week, by moving from jaw-jaw to war-war [3].

That crackpot who runs the Philippines, President Rodrigo Duterte, says that his military will occupy unoccupied South China Sea Islands. “It looks like everybody is making a grab for the islands there, so we better live on those that are still vacant,” he said, clearly making that most cogent reason for acting: FOMO [4].

Readers will be aware that China asserts sovereignty over almost all of the resource-rich South China Sea, despite rival claims from Southeast Asian neighbours, and has rapidly built reefs into artificial islands capable of hosting military infrastructure.   Too little too late.

The crackpot who runs Syria, President Assad, has used what is widely believed to be Sarin gas in an attack on civilians in a rebel held town, killing at least 85 people.  Tsar Trump has promised action.  Such as...

Readers will remember that his predecessor, arch coward Obama promised action if Assad went over 'the line in the sand' and used chemical weapons.  Well, Assad went over the line, gassed his rebelling citizens.  And Obama looked the other way.

So did Europe, for that matter.  Join the dots: Syrian refugees, not protected from atrocities by the West, fled the country.  Where did they go? Europe.

W&D knows full well that the Earth's climate is changing.  It has done for zillions of years.  Mrs W&D, an avid gardener, saw a piece in The Economist this morning, noting that Japan's famous cherry blossom is now blooming a full two weeks earlier than formerly. 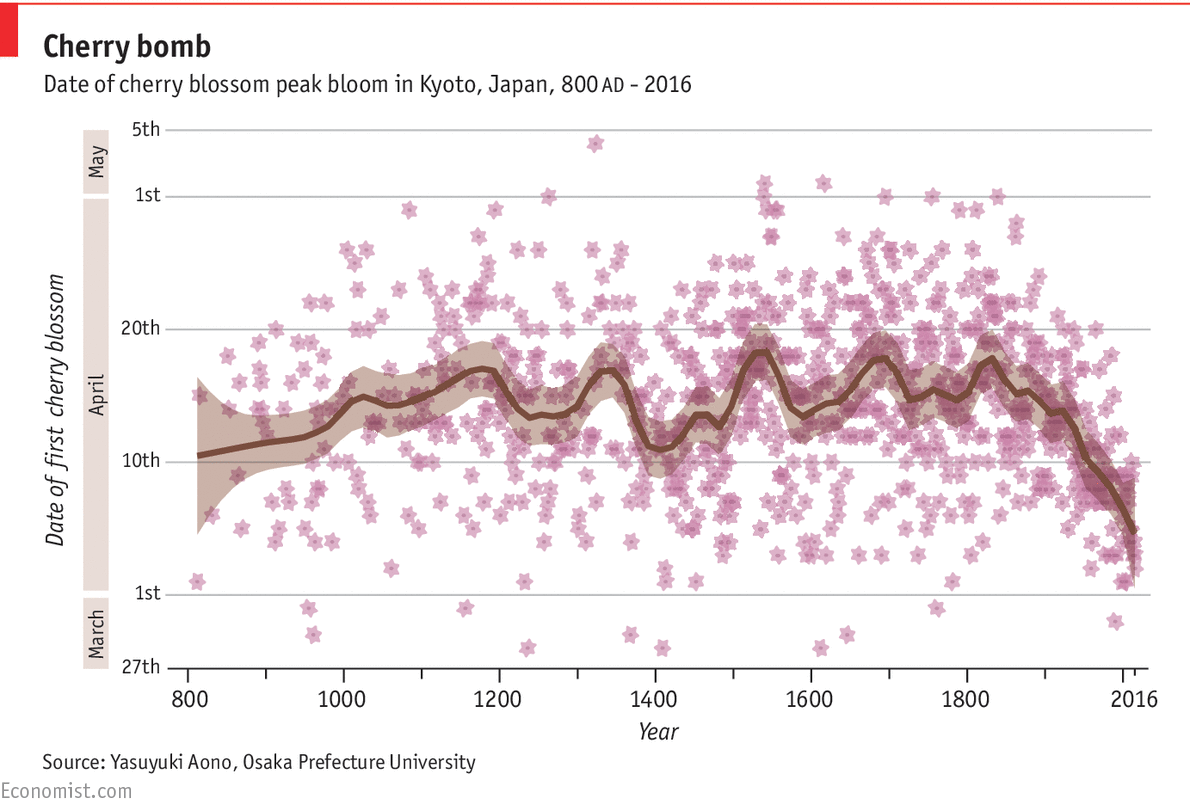 Qantas, an international airline, is talking of flying A350-900ULR aircraft from Sydney/Melbourne to London non-stop by 2022.  W&D gives entertainment advice for passengers wishing to endure the 20-hour flight: name the six countries whose names start and finish with the same letter (excluding A).

Gibraltar, a 'British Overseas Territory', is a rocky outcrop of some 7 square kilometres at the bottom of Spain.  The Spanish want it back [5].  And have announced that they will use Brexit negotiations as a lever so to do.  The Brits are sabre-rattling in response.  W&D remembers the last time a Spanish speaking country took issue with the UK over a far-away UK possession.

But the high concentration of assets in the one sector is in fact a significant risk, especially in the face of soaring household debt (Australia has the highest in the world).  A housing price collapse would cause a few headaches...

Meanwhile, the federal government remains entrenched in its supine denial position: "it's a matter of supply".  'Tish.

And the regulators are stuck on the horns of a dilemma; frozen in the headlights; have their heads in the sand; [insert your own metaphor here] as to what to do.

Of course the banks are seemingly doing their best to regain the trust of their clients.  But really don't give a toss about them.  Watch for more out-of-sequence interest rate increases, increases in bank fees and massive media relations exercises.

And that other gift that keeps on giving, Greece, is in the news again. The country looks like missing another deadline to reform its economy before it can get more bailout funds.  PM Tsipras now says that any deal must include debt forgiveness.  And the Germans are in no mood for forgiveness.  The sooner Tsipras blinks, the better for his citizens.

W&D takes a look at WA ongoing whinging about the GST - with help from independent economist Saul Eslake.  And, as usual, Miscellany to soothe your troubled mind.

[1] Khrushchev at least had a sense of humour, once saying "Politicians are the same all over. They promise to build a bridge even where there is no river."

[2] Which, now we know, was ended not because of Kennedy's toughness in demanding the the Soviet Union remove its missiles from Cuba but because, secretly, in exchange for this, the US would dismantle all U.S.-built Jupiter Medium Range Ballistic Missiles, which, unknown to the public, had been deployed in Turkey and Italy against the Soviet Union.

[3] The quote in reverse is often mistakenly attributed to Churchill.  Churchill actually said, "Meeting jaw to jaw is better than war".

[5] Spain lost it with the Treaty of Utrecht (1713) as a price for UK to withdraw from the War of the Spanish Succession.  The Spanish, whilst coveting Gibraltar, conveniently ignore their own two tiny disputed north African outcrops: Ceuta (18 square kilometres) and Melilla (12 square kilometres) each jutting out from Morocco.  Morocco wants them back.