Hats off to Brisvegas

Wry & Dry dips his lid to Brisbane [1] on winning the right to host the 2032 summer Olympic Games. By then, the world will be up to the Omega covid variant.

Although, without seeming churlish, it seemed to Wry & Dry that Brisbane was the Stephen Bradbury [2] defeating Doha (small problem with, err, corruption and possibly climate), Budapest (facilities, anybody) and Ankara (too many possible surprises, e.g. a revolution).

And Australia now joins the ranks of countries that have hosted more than two summer Olympics: Greece, USA and UK. [3]

[1] Now with the hitherto unheard appellation: "River City".  This to match Sydney as the Harbour City, Adelaide as the City of Churches and Melbourne as the Even Smaller Small Business City.

"Correlation doesn't mean causation". Or so Wry & Dry was taught in Statistics 101. But Readers may wish to consider the link between covid vaccine hesitancy and presidential vote.

The below chart seems to suggest that there is a link between the percentage of a state's vote for Trump and that state's covid vaccine hesitancy.

Of course, "I am hesitant" doesn't mean "I won't". But Wry & Dry predicts that covid will become a pandemic of the unvaccinated. The US CDC says that 97% of people currently hospitalised for severe covid were unvaccinated.

Wry & Dry would also want to ask what percentage of those have one or more of the five critical co-morbidities. But won't, this week.

Seen in a shop:

No wonder Queensland's finances are in such a mess. After the 72-5 vote by the IOC to give the 2032 Olympic Games to Brisbane, its Premier Annastacia Palaszczuk gushed, "Nearly 100 International Olympic Committee members cast their votes..."

[4] The Queensland Treasurer's FY-22 budget speech did not mention the budget deficit ($8.4 billion) or the government's debt ($106 billion).

Wry & Dry has little sympathy for PM Jimmy Morrison in his losing battle with Labor state premiers. The clear vaccination solution would be to free all the bikies presently in jail, and contract them to distribute vaccinations, since they have form in delivering drugs across the whole country, cheerfully and promptly.

Instead, his offhand comments, leaden action and pub-test mindset present as a wounded wildebeest being stalked by hungry hyenas.

Certainly, those hyenas have mercilessly ganged up on him. And the hyenas can now manage events to suit their popularity knowing that Jimmy will foot the bill.

Well, that's too bad, Jimmy. Time you took out your inner leadership, if it can be found.

Wry & Dry remembers when it was a federal Labor government that fell, effectively because of a Queensland hyena: Joh Bjelke-Petersen. [5]

The jackboot might now be on the other foot.

[5] When Queensland Labor Senator Bertie Milliner died suddenly in June 1975, Queensland Premier Bjelke-Petersen announced that he had selected political novice Albert Field, a long-time ALP member who was critical of the then Whitlam government. Field's appointment was the subject of a High Court challenge and he was on leave from October 1975. During this period, the Coalition Opposition led by Malcolm Fraser declined to allot a 'pair' to balance Field's absence. This gave the Coalition control over the Senate. Fraser used that control to obstruct passage of the Supply Bills through Parliament, denying Whitlam's by now unpopular government the legal capacity to appropriate funds for government business and leading to his dismissal as Prime Minister.

Princess Harry's newly appointed publisher has announced to the world that Harry is going to write "..an honest and captivating personal portrait." That is, an autobiography. And that he will be paid an advance of US$20m (which will go to charity, no news on the balance). This is, of course, in keeping with he and his wife's desire for privacy.

Readers will know that writing is not Princess Harry's strong suit. So his publisher has hired power ghost-writer J.R. Moehringer to do the work. JR, who wrote Andre Agassi's (tennis) and Phil Knight's (Nike) autobiographies, is expected to receive at least $1m for his efforts.

Ridiculous. Wry & Dry has written to Princess Harry offering to do the deed for half that, plus 5% of the gross.

If Readers searched the interweb for information of Syria's largest export, they would find the answer: olive oil, at about US$122m p.a.

Err, wrong.  Syria's largest earner of hard currency, to the tune of $3.4 billion p.a, is a local version of 'Captagon'. Syria's government is funded by not only Iranian cash but also by this amazingly additive drug. 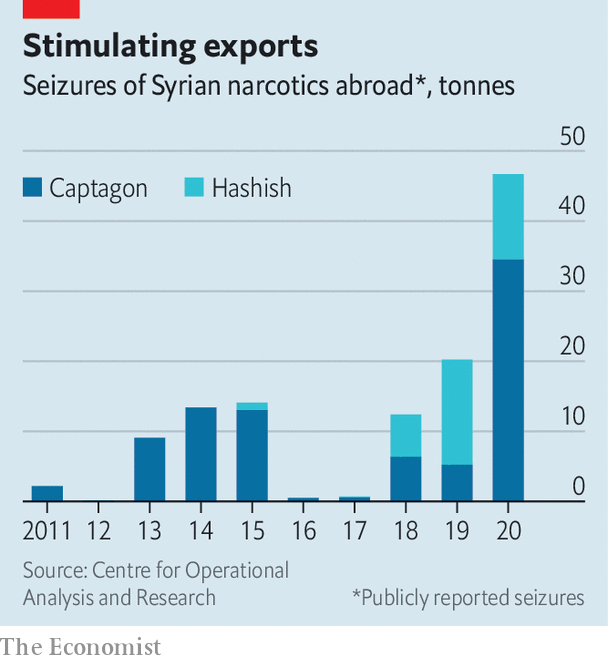 The branded pill Captagon, banned in the west since the 1980s, contained fenethylline, a synthetic drug that metabolises into amphetamine and a mild stimulant similar to caffeine.

The unbranded Captagon, manufactured by Hezbollah in the hills of Syria, has added to it highly addictive stimulants. And is highly popular not only in Syria, but also in the wealthy and young circles in Saudi Arabia and the Gulf states.

Perhaps this source of fiscal bliss should be considered by PM Jimmy Morrison, once China halts Australia's lucrative exports of Western Australian iron ore.  But then again, if Jimmy cannot manage the distribution of a vaccine inside Australia, what hope producing and selling a pill outside Australia?

The UK Met Office [6] issued an 'extreme heat' warning on Tuesday for parts of the UK.

The expected top temperature was 33 degrees in some areas.

The French have always been practical. Well, except for that arch megalomaniac, Napoleon. But, then again, he was Corsican.

Readers from a 'green' country (e.g. EU, Canada, Israel, Australia, New Ziland, etc) wishing to take that trip to the south of France to escape whatever discombobulates you will be pleased with arrangements. If you have been vaccinated, the door is open. No quarantine.

All you have to do is get out of Australia. But PM Jimmy Morrison has the keys in his bottom drawer - and he's not taking them out.

Hoist with his own petard [7]

Former Liberal and Opposition leader John Hand Wringer Hewson has been given the DCM [8] as a regular columnist for The Spencer Street Soviet Age and Sydney Morning Herald.

The reason given is that he is male. The Age/SMH announced it needs to meet their 50/50 gender balance targets. [9]

HWH was not amused, blaming political bias: "I was being too critical of the government and the strategy of Nine (the owner of The Age/ SMH) is definitely to be supportive of the government."

Wry & Dry posits that we-the-people would, without question, regard the Age/SMH as being generally centre-left and supportive of Labor, not of the current government.

JHWH might have been on stronger ground had he argued that 50/50 gender balance policies are either a nonsense or an idealist objective that should be tempered with common-sense.

Or could it be that he was just a poor columnist?

Either way, it seems he was hoist with his own petard.

[7] From Shakespeare's Hamlet, Act 3, Scene 4: "Let it work, For ’tis the sport to have the engineer Hoist with his own petard..."  A 'petard' is a small explosive device. 'Hoist' is the past participle of the archaic verb 'hoise', meaning to be raised or lifted up.

See here for an example of a petard:

[9] Weirdly, on the same day, The Age/SMH announced that Amanda Vanstone had also been given the DCM.  Ms Vanstone is female.

Five people aged between 23 and 28 were arrested, placed in hoods and handcuffs by security police in Hong Kong for distributing “seditious” children’s books that depict China as a malevolent wolf..

Wry & Dry comments: They were accused of “inciting hatred among the public, especially small children, against the Hong Kong government and Hong Kong judiciary, inciting the use of violence and encouraging disobedience of the law”.

Netflix subscriber growth in the first half was its worst since 2013. And it lost subscribers in the US and Canada in the second quarter.

The ANZ Australian consumer sentiment index dipped to 104.3 in the week ending July 18th from 110 last week, the sharpest drop since March 2020.

Wry & Dry comments: Just a guess, it's something to do with lockdowns.

Xiaomi, the Chinese maker of everything from rice-cookers to gaming monitors, has broken into the top two mobile phone brands. Samsung had a 19% share in the second quarter, Xiaomi had 17% and Apple was at 14%.

Wry & Dry comments: Perhaps Apple should expand its product range to include rice-cookers.

Opec and its allies have reached a deal to raise oil production in response to soaring prices. Initially, Opec+ will pump an extra 400,000 barrels a day each month from August, ramping up output by about 2m b/d in total by the end of the year. “I want you all to stay stationary so that my team can find the virus.”

A few weeks ago her plea (to football supporters at the Adelaide Oval) was: "do not touch that football."

This week it's Where's Wally. The professor is out on the streets of Adelaide looking for a virus in a red and white jumper.

Investment Matters
Do stock prices move too much?