Irreverently reviewing the week
Home » What Are You Looking For? » Wry & Dry » No. 41 FY-17 » USA: nothing to see here. Bankers' tea-leaves. Brazilian implosion.
Load Previous Article

USA: nothing to see here

Good grief.  Get a life. 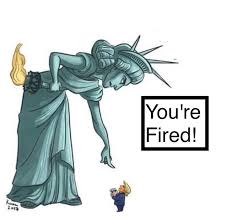 Tsar Trump is not going to get impeached.  Not even close.  Readers have reason to (a) not like his hair; (b) abhor his ties and/or (c) deplore his twittering.  But that doesn't mean to say he's ripe for impeachment.

Impeachment is only partially about illegality. The weight of impeachment is simply a question of numbers.  That is: votes.

Impeachment in the Yoo-Ess-Aye requires a two-thirds majority of Senators to vote for impeachment, as well as passing the House.  The Republicans control both the Senate and the House.

Too many Republican Congresspeople know that to vote to impeach Trump would imperil their chances of re-election at the mid-term elections in 2018.

The concept is called self-interest.  And as that irascible Australian politician Jack Lang once said, "In the race of life always back Self Interest.  It will be the only one trying."

Nothing to see here.

But, wait.  There's still nothing to see here

The knee-jerk reaction on Wednesday by Wall Street (-1.8%) to Tsar Trump's latest episode (whatever it was) was as daft as predictable.

The US stock-market is over-valued.  And, as W&D has repeated ad infinitum, ad nauseum, an over valued market will correct, no matter the reason at the time.

History shows that over-valued markets almost look for a reason to correct.  It might be China, Greece, Brexit, Trump, North Korea or Brazil (see below).  The reason doesn't matter, notwithstanding the media placing the blame on the blameless.

That's not to say that Tsar Trump's ability to stumble episodically like The Bold and the Beautiful [1] doesn't provide rich material.  For example...

W&D hasn't been following the FBI scandal (although he is waiting for someone to append '-gate' [2]), but was moved by Tsar Trump's assertion yesterday that, “No politician in history has been treated worse, or more unfairly than me.”

As a mere student of history, W&D begs to differ with Tsar Trump.  And alerts Readers to the following top five Workplace Health & Safely breaches committed against politicians over the years:

Message to the banks: read the tea leaves

W&D's mother had a wonderful saying whenever W&D was embarking upon an obviously foolish strategy (e.g. putting the cat in the washing machine).  "Read the tea leaves," she would say, "that's not a good idea."

In other words, predict the future response to your actions.  Or, put another way, argue as much as you like, but the mood of the meeting is against you.

Which brings W&D to the ongoing hysterical reaction of the banks to the new tax.  Perhaps they should read the tea leaves/ assess the mood of the meeting:

But key bank people kept digging their own holes.  The podium finish for hysteria goes to Ken Henry, the Chairman of the NAB.  Mr Henry, of course, when a mere public servant, recommended and designed the Rudd government's Mining Tax.  Even media commentators from the left were suggesting that Mr Henry now be wrapped in a restraining device and taken away by men in white coats.

Except, inevitably, Jeff Kennett.  Mr Kennett couldn't manage all the attention that everyone else was getting about the budget.  And, in a clear sign that his RDS was getting worse, comprehensively outed himself as a bank-tax-phobe.  W&D recalls that when premier of Victoria, Mr Kennett knew that he knew nothing about matters fiscal and allowed the massively eye-browed Alan Stockdale to manage the state's finances. W&D can only presume that Mr Kennett's sudden interest in finances reflects a dearth of other matters about which to write in his tabloid column.

But, ever fair, W&D notes that ANZ CEO Shayne Elliott, has run the white flag up the pole: "but it is clear that the legislation is now going to pass and our job is to move on."

The Budget: Good, Bad or Uncommitted?

W&D has researched the reaction over the years of we-the-people to the Budget.  Essentially, the polled voter has three choices as to the effect the budget has on the economy: Good, Bad or Not Committed (a polite "bugger-off, I'm busy sorting out my sock draw").

W&D is unfamiliar with much of the lingua franca of millennials (children born in the 1990s and since).  And often hears the term 'Brazilian'.  People seem to want to 'have a Brazilian'.  It rather sounds like a rum-based cocktail, perhaps with a coconut essence.  But enquiries at W&D's local about the ingredients of the cocktail met with laughter.  Of course, W&D's hearing is not as good as it should be, but from what he heard it sounded like a bizarre form of Anglo-Saxon torture.

And it is with this in mind that W&D turns to the country of Brazil - home, he imagines, to the Brazilian.  And home, also, to cries of "impeachment".

Readers will recall that former Brazilian President Dima Rousseff was impeached two years ago.  Well, it's happened again.  Ms Rouseff's successor Michel Temer is facing furious cries of "resign" from all quarters.  The cause is media reports of corruption.

The Brazilian economy is somewhat large.  Ninth in the world, in fact (just behind that other epitome of political sanity, Italy).  Australia is 13th.

But the economy is pretty sick: it's in its worst ever recession, inflation is 10.7% and the unemployment rate is 8.5%.  And this sort of news hasn't helped.  The currency (the real) lost 10% against the USD on the corruption allegations.  And the Brazilian stock market fell by the same amount.

Readers will be aware that it was as recently as 1985 that Brazil was governed by a military dictatorship.  And that democracy was restored in 1988.  But that political system is, well, collapsing.  The constitution established an electoral system with proportional representation and fragmented political parties that makes it difficult for a president to pass legislation - much like the Australian Senate.   Hence corruption and vote buying.

But somehow, W&D senses that things Brazilian will survive.

...the eldest grandchild of Emperor Akithito, Princess Mako is about to announce her engagement.  Nothing strange about that.  Except that in so doing she gets evicted from the royal family.  Japan's Imperial Household Law is extraordinarily misogynist.

Not only are women not allowed to ascend the throne, but must leave the royal family on marriage.  Logically, this reduces the royal gene pool.  It might be that the world will see a modern version of the War of Spanish Succession.  Readers will know that that war was caused by the death in 1700 of the childless Charles II, who ruled over a vast global empire.  The protagonists for the empire were Bourbon (France), Habsburg (Austria) and Wittelsbach (Bavarian).  The war lasted 13 years and spread across Europe, North and South America.  One result of the war was that Spain ceded Gibraltar to England.

W&D (who once lived in Japan and has seen the outworking of the role of women in Japan) hopes that the conservative Japanese will see the error of their ways.  Otherwise the world's oldest continuous monarchy (arguably dating from 660 BC, certainly from 509 AD) will wither.

Clients will have received an email requesting their consent to move to the new system.  Get on board!

Australian cricket captain Steve Smith is on a retainer of $1.2m plus $14,000 for every Test match played. With endorsements he earns over $3m p.a.

But they want more.  Much more.  Cry me a river.

...of course, Miscellany to soothe your troubled mind.

[1]  Apparently a third-rate US soap opera.

[2]  The world owes a great deal to Watergate, an office complex in Washington.

Firstly, the downfall of former US President Nixon.  The Democratic Party's national office was based in the building, and was the subject of a break-in in 1972.  The Nixon (a Republican) administration attempted to cover-up its involvement in the break in.  And failed.  Nixon eventually resigned.  Readers should watch the outstanding movie All The President's Men for an easy digestion of the complex circumstances.