Wry and Dry was set for a week of boredom.  Tsar Trump would make predictably outlandish comments.  Company profit announcements (see Investment Matters for Fleur's updates) would be ho-hum.  The boorish Australian cricket team would be sledging its way around India.  Yawn.

But yesterday, W&D's week lit up with a couple of announcements.

Firstly, poor Little William Shorten is having a tough time.  For much of the the past six months he has rejoiced as Croesus Turnbull and his Band-of-Merry-Men-and-A-Few-Women have stumbled and tumbled their way in government, cringing at every blow from friendly-fire (Tony Abbott); own-foot-shooting (Sussan Ley); credit ratings agencies; spiralling government debt and a self-interested, single-digit IQ Senate.

But if Little William's cage was rattled with the Croesus Turnbull's recent stunning parliamentary invective against him; it was yesterday shaking like Christchurch in an earthquake with the decision of the Fair Work Commission to reduce some Sunday 'penalty rates'.

Little William came out, with both pop-gun barrels blazing, "We will do everything in our power, in the parliament and the courts, to remedy this bad decision."

Hold the phone.  W&D doesn't have a strong view on penalty rates, but:

It was Little William, in 2012, when Employment Minister, who directed the FWC to investigate Sunday penalty rates.

It was Little William, in the 2016 federal election campaign, who said that he would fully support the decision of the FWC.

William Shorten and the FWC decision

W&D ponders that Little William would have gained more respect (and implicitly more votes) by disagreeing with but accepting the decision.

That would have been the mature response.

Secondly, and more prosaically, Dr Ken Henry, the former head of the federal Treasury and now Chairman of NAB came out yesterday swinging at Planet Canberra.  In amongst an excellent distillation of what-needs-to-be-done, he brutalised the partisanship of the politicians in Canberra:

"In the most recent federal election campaign, no [infrastructure] project anywhere in the nation - not one - had the shared support of the Coalition, Labor and the Greens."

"Every government proposal of the last ten years to reform the tax system has failed."

All true, Dr Henry.  But unless we-the-people vote to get rid of the bozos in the Senate, nothing will get done.

Speaking of bozos, it is W&D's melancholy duty to observe that former PM Tony Abbott's RDS [2] has become worse.  In one of the weirdest speeches ever given by an Australian politician (and that data set includes Barnaby Joyce, Jacqui Lambie and Clive Palmer), last night he said:

And that was just the beginning.

The most alarming/ scary statement Abbott said was to link housing affordability to immigration.  W&D considers that Abbott is mischievously looking for an excuse to cut immigration.  And has chosen the easy target of housing affordability.  Sadly, this logic will now be taken up by the nutters on the far right.  Abbott is to be condemned in the strongest terms for this irrationality.

Time for Abbott to take himself to a secluded residential RDS treatment clinic and have this most alarming affliction attended to.

Bonus: W&D is sure that such treatment is claimable against Medicare.

Still on the subject of comfortable lives, W&D notes that Ahmed Fahour, the AustPost CEO, has fallen on his sword following the very public discussion about his compensation package.  This is regrettable for a number of reasons.

Even more regrettable is the archaic decision of Ministers Corman (Finance); Fifield (Communications) and Cash (Public Service) that the remuneration of AustPost's CEO will now be determined by the government's Remuneration Tribunal.

What the ...!  The chains of the public service will now start wrapping themselves around AustPost's neck.  This knee-jerk reaction is another nail in the coffin of good government.  And this from a party that supports smaller government and private enterprise.   Croesus Turnbull has failed. 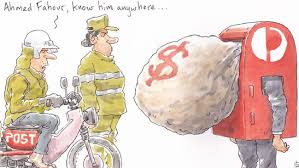 W&D has always wondered what was 'the American dream'?  And decided it was all about working hard, succeeding and being able to reap the rewards of your labour.

That seems to have changed.  The American dream now seems to be winning Powerball.

Imagine the winners.  W&D recalls the famous story of a winner of the Scottish equivalent, when the winner's wife asked him, "what will we do about the begging letters?" He replied, "keep sending them out."

Meanwhile, updates from last week are:

1.  After last week's internecine comments, and as W&D predicted, William Shorten confirmed Labor's RET of 50% by 2030. "Forget about the word games - 50% RET is Labor's target, our goal, our aspiration..."  But then he reverted to word games: the $48 billion price tag of Labor's RET is not a cost, but private sector investment 'brought into the economy."

2.  Those Grecian 2012 (i.e Greek government debt) troubles have been swept under the carpet.  For now.  Wait for the sound of the can being kicked down the road.

Elsewhere, readers will need to peruse the following piece about the post Olympic shambles in Rio before clicking onto Investment Matters, to see how clients' companies are going this profit reporting season.

And before that, of course, Miscellany.  To soothe your troubled mind.

[1]  And did. 'For 'tis the port to have the engineer/ Hoist with his own petard; and 't shall go hard/ But I will delve one yard below their mines/ And blow them at the moon.  William Shakespeare: Hamlet.  The phrase means to cause the bomb maker to be blown up with his own bomb.