Xi Jinping, President of the People's Republic of China.

Mr Xi has managed in a few short years to expand China's borders with impunity; re-establish a cult of personality in Chinese leadership; commence creating internal neighbourhood personal surveillance cells to spy on every Chinese citizen; commenced a 'social-credit' system that will assess every citizen's behavior and award points; and smash any semblance of democracy in Hong Kong.

He is a winner because he successfully speaks softly, carries a big stick and uses it, as it were.

His major victory, so far, is with only a little more subtlety than Hitler's territorial expansion across Europe in the mid 1930s, to effectively annexe 1.3m square kilometres of the South China Sea, the islands within it and hence the resources under the sea bed.  He has used the (then eleven, now nine) dashed lines drawn on a map [1] in 1947 to assert a claim over a vast territory. The fantasy of China's claim is that the southern most point of its claim is over 1,200 kilometres south of Hainan Island, China's largest and southern most inhabited island.

Mr Xi is claiming islands that are also claimed by Malaysia, Philippines, Taiwan and Vietnam.  And to emphasise his claim has created and occupied seven islands from reefs; and building military installations on them.  Only the Philippines has protested (and had their claim upheld by an international court; but China gave the ruling the single digit salute).  US President Obama, in the same manner as his cowardice over the 'red line' in Syria, didn't lift a finger.  If the US isn't going to act, no other country will.

Mr Xi, like Tsar Vlad, will push and push internationally until he is stopped.  W&D has grave fears for Taiwan.

But also like Tsar Vlad, Mr Xi's muscularity hides domestic issues.  The clampdown on social media, increased censorship and intolerance of any sort of dissent cannot hide the restlessness of China's massive middle class.  To date, Mr Xi is comfortably winning the international issues.  But sooner or later, and probably not in his lifetime, the domestic social issues will overwhelm everything else. 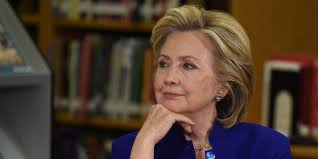 If ever a candidate for President had the odds stacked in their favour, it was Ms Clinton.  The massive advantages of two former Presidents actively campaigning, the benefit of incumbency, over $1 billion in campaign funds, the women's vote, the Latino vote and the black vote were not even her strongest suit.

Her strongest suit was her opponent: a man without political experience, a bigot, a racist, a misogynist, a bully, and a businessman with a reputation for being economical with the truth.  And those were the least of the problems.  The Trumpster had throughout his career placed self-inflicting land mines that would start exploding as soon as the campaign began (and will dog him throughout his presidency).

Nonetheless, Ms Clinton campaigned with as much passion as a rock.  And rather than campaigning on matters core to middle America, she focussed on the same victim-rights issues she had when she was in student politics.  The adoration of the media and anointing by Hollywood celebrities blinded her to the threat of the Trumpster.

She and her campaign took the magnitude of The Trumpster's outrageous claims as verification of the irrelevance of those claims.  Ignoring that, in many cases, as the person-on-the-street saw it, The Trumpster got the direction right - the magnitude was the showman.

Twelve months ago, in this corresponding edition, W&D predicted that Ms Clinton would win in the largest victory since Reagan.  Mea culpa.

Tony Abbott is runner up for the second successive year.  Amazing!

W&D considers that The Abbott's brain should be put into a petrie dish and researched upon as an amazing example of Relevance Deprivation Syndrome.

The Abbott's continued presence on the back-bench and political interjections make a mockery of his promises not to be a wrecker.  His mind is filled with a unique blend of vengeful bile and child-like self-pity.  He has become a lightning rod for any discontent.

Of all the former Prime Ministers of this country, with the clear exception of Kevin Rudd, Abbott has behaved with the least respect for the office he used to occupy.

If the man had any courage or honour he would resign from politics.  And take up a role as butler to Prince Phillip.

Investment Matters
Did you "Sell Everything!" ??