Irreverently reviewing the week
Home » What Are You Looking For? » Wry & Dry » No. 23 FY-17 » Which track?
Load Previous Article

On Monday The Economists magazine published a chart of which countries' citizens see their country on the right or wrong track.

W&D is somewhat bemused by the descriptor: 'right' or 'wrong' track.  Quite binary.  Nonetheless it makes for interesting reading... 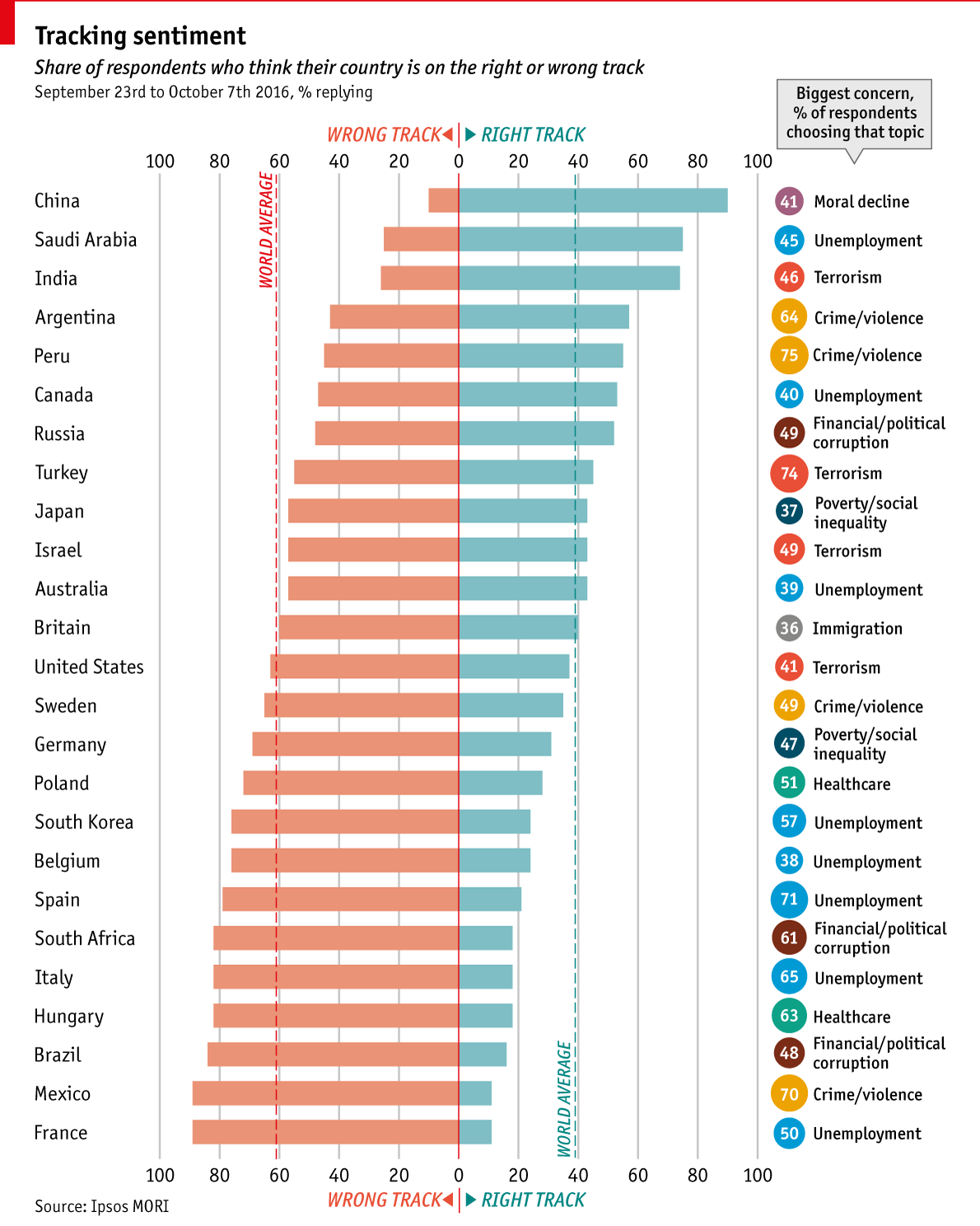 W&D has tried to look for common threads on either side of the track.  Even moreso, when looking at the right-hand column (the circles with numbers), which shows the biggest concern of the people.

The Economist's analysis was empty, other than to note that in France, the proportion of people who worry about unemployment is five times the actual rate of the unemployed.

W&D's take is that the poll is a general measure of unhappiness with government - the 'major concern' reflects the concern of the day, that which comes firstly to mind, or quite possibly, not the concern that is politically incorrect.  Can you imagine a German telling a pollster that immigration is a major concern.    The opaque 'poverty/ social inequity' is far more acceptable.  So, W&D senses that the data in the right-hand column is less compelling than the bars to its left.

And what concerns W&D?

Firstly, that France and Italy are too ossified to change notwithstanding the probability of a new president in the former and a reforming PM in the latter.  Readers will already have noted that the newly anointed French Republican candidate for next year's presidential election, François Fillon, has said that he will reform the welfare system and slash the size of the public service.  M. Fillon has been called the French Thatcher.

The powerful French trade unions have instantly pledged to bring the country to a standstill over his harsh austerity programme.

W&D's only hope for France is that M. Fillon is as successful in freeing France from its chains as Thatcher was for the UK.  Fat chance.  The Brits knew that their backs were to the wall and they needed stomach for the economic fight.  And Thatcher's economic success was vindicated by being elected thrice.  W&D's view of French history suggests that after initial enthusiasm to fight for change, the enthusiasm for battle dies.

Secondly, that net/net, in only seven countries do they-the-people think their country is on the right track: China, Saudi Arabia, India, Argentina, Peru, Canada and Russia.  Oh me miserum.