The French crisis is more political than Italy's.  And because France is now the number two economy in the EU, the political problem is huge.

But firstly, a brief update.

The right-wing Republican party is holding its primary elections to see which candidate will run in next year's presidential election.  In the first round, François Fillon won comfortably.  M. Fillon beat M. Sarkozy, former French President.

The main attractiveness of M. Sarkozy, like that of the current President, is not the man but the woman.

Or, in the case of M. Hollande, the women: Segolene Royal, Valerie Trierweiler and Julie Gayet.  Clearly 4% means a lot in France. 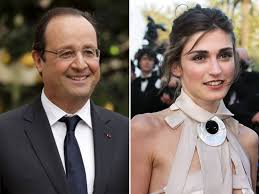 And not quite so with François Fillon.  His wife, Penelope Clarke, is Welsh.

She is smart, worldly and wise.  She will add much value to Fillon's Presidency, if he wins.

M. Fillon likes to drive fast cars - he was once a guest on the French version of Top Gear.  More relevantly, he is a fiscal conservative.

The election will be a battle between Fillon's Centre-right Republican party and the far-right National Front, headed by Marine Le Pen.  The left-wing Socialists will be given the NVPL [1].

A victory for Ms Le Pen would be dramatic, if not drastic.  She wants to pull France out of the Eurozone (i.e. back to the French Franc) and hold a referendum on membership of the EU.  France leaving the EU would cause its effective collapse.

The media is mumbling that her victory would be like The Trumpster's.

Err, no.  Notwithstanding that the ingredients exist for authoritarian nationalism (there is another word for it, but it just doesn't come to W&D's pen that easily) i.e. savage terrorist attacks by Muslim extremists and a hatred of the political elite such as there is in the US, the presidency of Le Pen is not assured.

Her party, the National Front, has been around for years, and many remember and reject the openly racist views of the party's founder, her father Jean-Marie.  Those with longer memories, or who study history, recall the stain on French history that was the Vichy regime in the Second World War [2].

The Trumpster may surprise because he is a political maverick.  Le Pen is not.

It is difficult to conceive that, no matter how disenchanted the average French person is with the mainstream parties, that Le Pen would be elected.

But almost all said that about the US election.

[2] The Vichy regime was the nominal government of France, run as a puppet state of Nazi Germany and named after its de-facto capital.  Premier Marshal Pétain ordered the French Government's military representatives to sign an armistice with Germany on 22 June 1940. Pétain subsequently established an authoritarian regime. Calling for 'National Regeneration', the French Government at Vichy reversed many liberal policies and began tight supervision of the economy, with central planning a key feature. Labour unions came under tight government control. The independence of women was reversed, with an emphasis put on motherhood. Conservative Catholics became prominent.  The media were tightly controlled and stressed virulent anti-Semitism, and, after June 1941, anti-Bolshevism.

Nazi Germany kept two million French soldiers prisoner in Germany, carrying out forced labour. They were hostages to ensure that Vichy would reduce its military forces and pay a heavy tribute in gold, food, and supplies to Germany.