Amazon is not just a river...

... apparently.  Wry & Dry was brought up with the knowledge that the Amazon was the world's largest river (by volume).

But now it seems as though a company named Amazon is soon to become the destroyer of Australian retailing.  To the benefit of Australian shoppers.

Think of 'disrupters' and Readers will think of Uber, Webjet, Seek.com, etc.  Some might also think of Amazon.  As well they might, as Amazon is already Australian shoppers' number two on-line retailer (after Woolworths). More broadly, Amazon Inc is now the world's largest online retailer and 3rd largest retailer overall, after Wal-Mart and CVS (a US retail pharmacy chain).  Not bad for a company that started just 23 years ago.

Speaking of disrupters, of the 10 largest companies in the world, just two currently on the list were on the list 20 years' ago: Exxon Mobil and Microsoft.

Amazon's service offering is all about online convenience, cheaper prices, a massive range of goods and efficacious delivery.  Apparently, Amazon offers branded electronic and electrical products at up to 30% cheaper than JB Hi-Fi.

And Readers can see how the share-prices of US on-line retailers have smashed US department stores over the last 12 months: 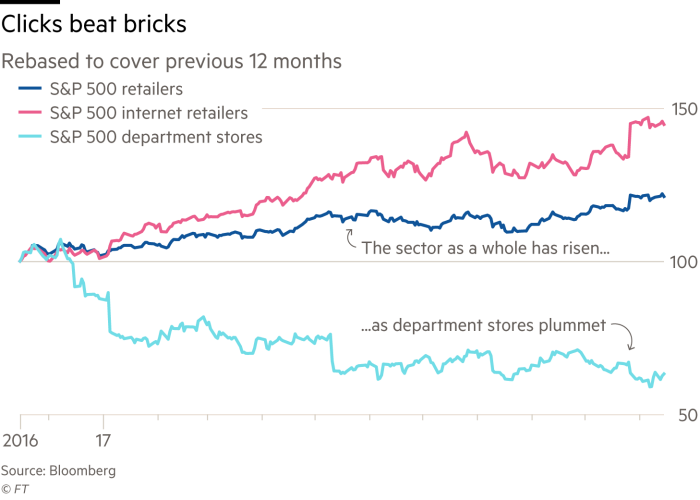 So, with all its focus on a significantly better deal for customers, W&D has just one question:

Is there an Amazon Bank?

W&D laughed out loud in the first class compartment of his early morning tram.  The previously unheard of National Party Senator, Barry O'Sullivan, is now backing a Commission of Inquiry into the Australian banks because... he considers the Nationals didn't get their way in the same-sex marriage debate (the Nationals didn't and don't want a conscience vote).

W&D is trying to join the dots between the two issues.  But cannot find any remote way to connect them.  Other than his property interests.  Senator O'Sullivan, who after leaving school became an office boy at the local newspaper and working in the police force for 15 years, has built up an investment portfolio of over 50 properties.  W&D suspects that his antipathy towards banks might have something to do with his dealings with them in relation to his property investments.  Just sayin'.

Liberal Senator Ian Macdonald has changed his mind and now wants a banking Royal Commission (one rung higher on the lawyers' fee-opportunity-ladder than a Commission of Inquiry).

Q.  What acute, critical and significant event caused him to change his mind?

A.  He spent 'too much of his valuable time' resolving a credit card PIN number issue with his bank.

"My blood pressure is through the roof," he wailed.  "Their customer service is just pathetic."

W&D would consider that if the good Senator has a haematological condition, he surely should see his local GP.  And if he finds a bank's service not able to meet his needs, perhaps a Royal Commission is an expensive way to seek redress.

But, then again, Senator Macdonald is a senator from ... Queensland.  And, surprise, surprise, so is Senator O'Sullivan.

W&D saw the following headline in the AFR on Wednesday:

So, help W&D out, here.  Can there be borrowers without debt?  Oh, never mind.

The body count in getting larger

There are now nine members of federal parliament forced to hand back the keys to their palatial Canberra offices.  The latest (Wednesday) is little known Senate cross-bencher from Nick Xenophon Team: Skye Kakosche-Moore.  SKM has discovered that she is a dual citizen (UK & Oz).

She had previously not known that Singapore was a British colony when her mother was born there.

Which brings W&D to the quality of Australian education.  No, it doesn't, really.  SKM, whilst being born in Australia, was mostly educated in Oman.  It is unlikely that the educators managing the Omani International Baccalaureate would have known that Singapore was a colony of the UK until 1963, and educated Skye of that fact.

...was talking about Germany.  He hadn't visited it, but it always seemed a secure and stable country that made good cars.  So he was curious about all the current political turmoil in the country.

Well, sighed W&D, it's complicated.  Germany's post-Hitler constitution was designed to ensure a centrist government of stability.  And East German strong-person and Chancellor, Angela Merkel, has always conveyed an air of boring gemütlich competence that seemed to fit the bill.

"That is its day job," interrupted Deepak.  "Exactly," W&D responded.

But then it needs to get on with managing its country for the future.  However, the history of Ms Merkel has been managing crises of today (which has to be done): Greece; a eurozone in disarray; an EU united only in its desire to extract a large Brexit price from the UK; an aggressive Tsar Vlad; etc.  But ignoring the future.

She, and her unwieldy coalition governments have failed to craft a clear path for Germany.  Admittedly, the just-below-the-surface-ongoing-apology for Nazism has meant a lack of desire to assert any form of German nationalism.  If Deepak were to drive through the UK, France or Switzerland, etc, he would see the Union Flag, Le Drapeau Tricolore or the Swiss Cross flying from buildings and homes.  And yet he would be hard-pressed to see the Bundesflagge flying in the breeze anywhere in Germany.

However, W&D isn't calling for more nationalism from the top.  Rather, some clear understanding of where Germany is going.

And it is this weakness that caused her party to have its worst election result since before she came to power in 2005.  Ms Merkel has failed, after months of negotiation, to form a new coalition government.  She is threatening early elections.  However, this may make matters worse.

Voters will not readily forgive her.  And her image as a Western leader is simply, W&D told Deepak, because there is no-one else.

"Oh, my goodness gracious," summed up Deepak. "Sounds like she is verurteilt."

The law is not such an ass, after all

Readers will remember that in 2015 W&D was apoplectic over a WA judge's decision to award $25m to a Ms Olivia Mead, an unhappy benefactor (original bequest: $3m) of a somewhat large estate ($1 billion).  The unhappy benefactor lawyered-up and had presented the court with her wish-list.

That list included: a million dollar piano, a $250,000 diamond encrusted bass guitar, an annual allowance of 20 pairs of $300 shoes and a $2.5m home with luxury fittings.  And the judge, clearly in the mood of being generous with other people's money, caved in.

W&D's faith in the legal system has been partially restored.  The WA Court of Appeal slashed the benefaction to about $6.1m.

But was intrigued to see a survey conducted by the Labor Party in Victoria that divided Greens' voters into two groups: red and blue.  Fascinating.

Red-Greens are renters who come from Labor families, and who are typically university students, lecturers or staff, or millennials starting their careers.

Blue-Greens own inner-city expensive homes and have parents who voted Liberal.

The Labor survey concluded that Red-Greens (30% of Greens) should be targeted by the party, as their core values were Labor values.

Blue-Greens, or Teals, (70%) were lost to Labor, as their preoccupations were essentially material conditions and not the state of the world environment.  Their altruism existed as long as it didn't inconvenience them.

W&D was moved to ask what would happen when the Red-Greens grew up?  Would they vote Labor?

On Sunday, in a state by-election in inner-city Melbourne, the incumbent Labor party came up against a combination of Red-Greens and Blue-Greens.  It failed, badly (an 11% swing has to be nasty).

On Monday, Croesus Turnbull attempted to grab the policy initiative with a promise of tax cuts.  He failed, badly.

Tomorrow in Queensland there is a state-wide election, where none of the four contesting parties (LNP, ALP, Greens, One Nation) has any desire to halt the state's Venezuelan-like dive to fiscal perdition.  W&D predicts One Nation or Greens holding the balance of power: the ultimate testimony of electoral failure.

Tomorrow is also the 10th anniversary of the election of the Rudd-Swan government.  W&D feels it is dutiful to remind Readers of the event that started the ball rolling to this nation's current political ineptitude and fiscal shambles.  Actually, it wasn't the election of the Ruddster that started the rot: it was John Howard's unwillingness to hand over the reins to Peter Costello two years' earlier.  Since Howard, we-the-taxpayer have had Rudd/ Gillard/ Rudd/ Abbott/ Turnbull/ Shorten.

And it gets worse: the Ruddster and his apologists have commenced the retrospective Rudd-success narrative.  The first part being that his actions during the GFC saved the Australian economy.  Piffle.  The RBA lowering interest rates by a massive 3% and the boom in the Chinese economy were what allowed Australia to avoid a recession.  But the Rudd/ Swan legacy of a spending splurge and the consequential unsustainable debt will cripple the next generation.  We-the-taxpayer are now paying an annual interest payments of $16 billion p.a., which rise to $20 billion p.a. by 2020.  And that doesn't include the cost of the NBN, which is 'off-balance-sheet' for spurious accounting reasons.  W&D could build a lot with $16 billion p.a.

Norway's sovereign wealth fund, the world's largest, has announced it will sell some US$40 billion of oil and gas stocks, so as to diversify away from its primary source of income, North Sea oil.

"Government is terrified it has lost control of parliament.  King Charles cancelled parliament and he lost his head."

-   Adam Bandt, Greens federal Leader, on the one-week cancellation of the House sitting.

Is the implication that a Greens' leader is supporting the monarch?

Latasha Gamble, 24, decided to rob the local bank, in Chicago.  So she put on a disguise: a dark coloured knit hat, a dark curly wig, black lipstick, black winter gloves, a puffy winter coat and a pink nightgown with a floral pattern and white shoes.

Unfortunately for Latasha, the tellers in the bank recognised her.  As she worked there.

Guess what happens next

The UK abolished its paper tax disc (a sticker that goes a car's windscreen to confirm that the annual tax has been paid).  Scrapping the disc was supposed to save £10m p.a. as drivers would still pay the tax, but there would be no cost of issuing the disc.  What was the total amount saved?

a.  £10m.  The Department of Transport got the forecast exactly right;

b.  £1m.  Still a winner, but there were some processing issues;

Close.  But no cigar.  The correct answer is d.  Drivers just stopped paying the tax and hoped not to get caught.

Early Tuesday morning, the Russian Defense Ministry tweeted what appeared to be aerial photos of a convoy of vehicles traveling on a dirt road.

"This is the irrefutable evidence that there is no struggle against terrorism as the whole global community believes. The US are actually covering the ISIS combat units to recover their combat capabilities, redeploy, and use them to promote the American interests in the Middle East," it wrote in the English version of the tweet posted in both English and Russian.

Unfortunately, the 'irrefutable proof' was footage from the video game 'AC-130 Gunship Simulator'.

Have a wry and dry weekend