Irreverently reviewing the week
Home » What Are You Looking For? » Wry & Dry » No. 21 FY-17 » Forget Trump. A bigger vote is upcoming in Italy.
Load Previous Article

Forget Trump. A bigger vote is upcoming in Italy.

"How could such a beautiful country be such an economic basket case?"

This was the question that W&D posed to Mrs W&D on their first visit to Italy, a few years ago.

But a basket case economy. 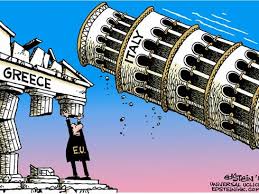 The economy is a shambles for many reasons.  Bureaucracy is a major one.

Italian bureaucracy is known to be as comical as economically wasteful.  For example:

Matteo Renzi, the energetic and left-wing Prime Minister, wants to amend the constitution to give more powers to the central government.  The referendum will be held on 4th December.

Voters will be asked to back the approval by parliament of Renzi’s ambitious reforms.  He wants to strip the Senate of many of its legislative powers and modernize Italy’s rusty institutional framework by speeding-up its sluggish decision-making process.

Opponents of the reforms span the political spectrum, aligning political opponents on the far right and many on the left, including within Renzi’s own party, who have said the change will dangerously weaken Italy’s system of checks and balances.

Of course, any business person in Italy will tell you that there are so many check and balances in place that, in Italy, nothing gets done.
Sadly, the reforms looked doomed to fail.