...but you cannot argue with them.

So, notwithstanding The Trumpster's nauseating comments and detestable behaviour, Wry & Dry is taking a pragmatic view of his election victory.  And ignoring the dummy spitters...

It is what it is.  Oh, and it being what it is, W&D offers an ever so slightly humble mea culpa for a wrong election outcome prediction.

The markets have strongly rallied with the Trumpster's win: New York is up over 4% for the week and the All Ords is not too far behind at 3%.  But it is early days.

W&D will below present a practical look at the consequences of President Trumpster, and will ignore, with one exception, the meaningless media examination of the electoral entrails to explain Trump's victory.  There is a lot more to it than the simplistic 'angry white workers without a college degree'.

That one exception is to present a statistical observation.  Some observers are blaming Hillary Clinton for Trump's win.  But consider this: in the eight years of his presidency, Obama presided over the loss of an unprecedented number of Democrat-held state governorships and legislatures.  Federally, he lost the House of Representatives, then the Senate and now the White House.

Obama and his party are at the back of the line.

Trump victory and Brexit are very different, not the same

Allow W&D to observe that it is nonsense to suggest that Brexit and the Trump victory reflect the same 'revolution'.   That is lazy analysis.  The issues are very different.  Brexit was effectively a sovereignty issue that crossed party-political lines.  Trump's victory was a vote for one man's view of power and change, that excited enough voters to win.

There are just two common threads.  Firstly, a sense that the common man/ woman felt heard.  Secondly, the losers are/ will be bitter in defeat.  In the UK, the Remainers, especially the neoliths north of Hadrian's Wall, refuse to accept the legitimacy of the Brexit vote.  In the US, the Clintonazoids will be just as furiously and self-righteously aggrieved.

By the way, those on the right wing of Australian politics would do well to spot the difference between Trump's victory and the rhetoric he used to get there.  But they haven't.  And won't.  Ms Hanson and her tribe of single-digit-IQ sociopathic misfits somehow see themselves aligned with President Trump.

No.  The One Nation Party is certainly aligned with some of Trump's more deranged supporters.  But at the top of the tree, Trump will successfully run the world's largest economy.  Ms Hanson's mind is still running a fish 'n chip shop somewhere in the back-blocks of Queensland, 40 years ago.

In our sister publication, Investment Matters, Dennison Hambling, First Samuel's CIO, has a short but incisive piece on how the outcome might affect First Samuel clients' investments.

In short, Trump is pro-growth and clients' investments should benefit.  But Europe remains a worry.

Elsewhere, some people are not sure whether they should be happy with the outcome.  Or not.   Especially The Trumpster's love-child...

If nothing else, cartoonists are guaranteed work for the next four years... And W&D wonders if, somewhere out there, there might be another... 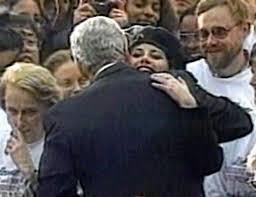 ...recreation, W&D enjoys recreation, too.  As do the fine folk in northern Tasmania.   Because last Monday the northern Taswegians didn't have to get out of bed.  And go to work.  Because it was Recreation Day.

Yes, readers.  Recreation Day.  And it is there because in February the southern Taswegians have Royal Hobart Regatta Day.  At least there is actually a sporting event associated with the holiday.   And on Regatta Day those in the north will go to work and those in the south will not.

Hard to tell the difference, really.

Meanwhile, more seriously, in Hong Kong, China doesn't have the same sense of democracy as, well, the rest of the modern world.  China has blocked two pro-independence lawmakers from taking up their posts in the territory’s Legislative Council. The intervention by China’s National Peoples' Congress in Beijing, which pre-empted a constitutional ruling on the case in Hong Kong, is the first of its kind since Britain handed back Hong Kong in 1997.

Speaking of eyes, W&D is pondering the eyesight of seven Somali pirates, who in 2010 attacked what they thought was a cargo vessel in the Gulf of Aden.  Oops.  It was USS Ashland, an amphibious assault ship.  The US navy was gentle on the pirates, firing just one shot.  Which sort of wrecked the pirate ship.  Okay, it was blown out of the water.  One pirate was killed, the others rescued and arrested.  Yesterday the pirates were sentenced by a US court to life in prison.

...readers can learn more on the Trumpster's policies (yes, he does have some); how the ANZ's Asian experiment cost shareholders a fortune, with no-one being held accountable and, still on the theme of banks, a quick review of their recent profit announcements.  And an update on the upcoming superannuation changes and the Opposition's change of mind: even more superannuation tax.